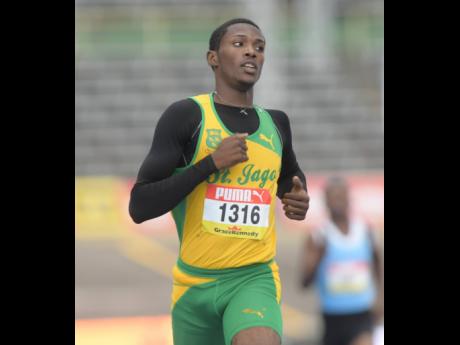 The recently completed Central Championships were a personal showcase for Anthony Cox, the 2017 World Under-18 400 metres finalist. Competing for York Castle High School, Cox snipped a fraction off the meet record after giving it a scare in the heats. Ineligible for this year’s ISSA/GraceKennedy Boys and Girls’ Athletics Championships, the tall speedster has his sights set on the Carifta Games in Grand Cayman next month.

Cox ran solo to the record time of 46.46 seconds in the final on February 27 at the GC Foster College for Physical Education and Sport. That isn’t too far off his personal best of 46.34 seconds.

In the preliminary round, he tested himself with an effort clocked in 46.64 seconds, which barely missed the 2018 mark of 46.60, by Malik Smith, then of Bridgeport High School.

Those performances indicate that he is back in the form that brought him within a whisker of a medal at the 2017 World Under-18 Championships.

Cox was smiling from ear to ear when the running was over.

“I feel happy. I just came out here, came to do my best today, and enjoyed my championships”, said the St Jago High transfer. Stating the obvious, he continued, “I’m in very good shape, and I’m just going out there and doing my best and seeing what I can complete.”

His win secured York Castle’s only gold medal of the meet.

His move from St Jago to York Castle makes him ineligible for Champs, so Cox is looking to the Carifta Games to keep his momentum going.

“Well, I’m looking out to go to Carifta”, the 18-year-old signalled.