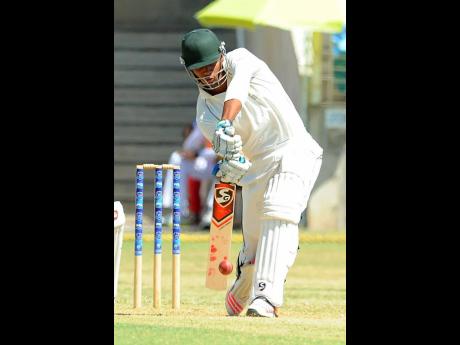 The Leeward Islands Hurricanes will enter today’s third day against the Jamaica Scorpions with a slight advantage in Regional Four-Day Championship cricket action at Sabina Park. The visitors are 171 for three in their second innings, an overall lead of 131. Kasey Carty has looked solid and will resume on 63. The other not-out batsman is Jahmar Hamilton, who is on 13. Devon Thomas again proved a handful for the Scorpions bowlers and made 65 for the second time in the game.

Debutant Gordon Bryan has looked the pick of the Scorpion bowlers so far with two for 32. Nikita Miller, for once, was neutralised and was held to one for 47 from 21 overs.

Earlier in the day, the Scorpions managed to eke out a 40-run first innings lead by making 250 in reply to the Volcanoes first-innings score of 210.

Brandon King looked set to make a stroke-filled century but fell for 95 with 11 fours and two sixes. Jermaine Blackwood was the next best scorer for the home team with 45.

Captain Paul Palmer Jr played a few nice shots in between a couple of lives to make 34 while Gordon Bryan swung his bat to good effect to make 23.

Off spinner Rahkeem Cornwall was the chief destroyer with six for 57 while Sheno Berridge took two for 59. The third day’s play will get under way at 10 o’clock this morning.

AT GUYANA NATIONAL STADIUM: Barbados Pride, trailing Guyana Jaguars by 125 on first innings, reached 228 for six in their second innings, on the second day of their ninth-round match.