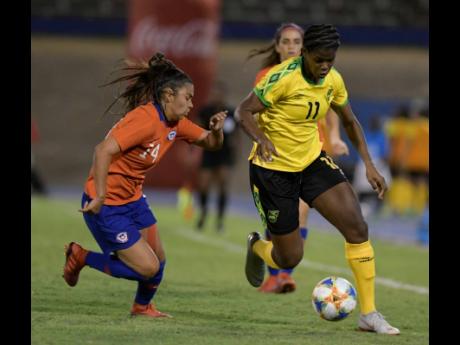 Andre Lowe
Jamaica's Khadija Shaw (right) dribbles past Chile's Daniela Pardo during the international friendly between Jamaica and Chile at the National Stadium on Thursday. Jamaica won 1-0 on a goal from Marlo Sweatman.

Head coach Hue Menzies says that he will be making a number of changes to the Reggae Girlz team ahead of the second and final match of their friendly series against South American side Chile at the Montego Bay Sports Complex tomorrow.

The Reggae Girlz defeated the Chileans 1-0 in their opening match on Thursday, courtesy of a Marlo Sweatman goal in the ninth goal.

Menzies said that he plans to give other players in the squad who did not get much playing time in the opening game a chance to impress the coaching staff in tomorrow’s fixture.

“This is a valuation week camp and so we are going to have different changes,” said Menzies. “We feel that athletically, we can keep up with things and the Chileans.”

The coach is calling on fans in the Second City to show their support for the FIFA Women’s World Cup-bound Reggae Girlz.

“Jamaicans need to come out in their numbers in Montego Bay, like how they did on Thursday because we need all the support that we can get here for the girls,” Menzie said.

Reflecting on his team’s performance on Thursday, Menzies said: “We have to be going for that victory on Sunday because this will instill a lot of confidence in the players moving forward.”

Both teams are using the matches as part of their preparations for this year’s FIFA Women’s World Cup tournament, which will be held in France in June.

The Reggae Girlz are ranked 53rd in the world while Chileans are rated 38th.

The Jamaicans are drawn in Group C alongside Italy, Brazil and Australia.