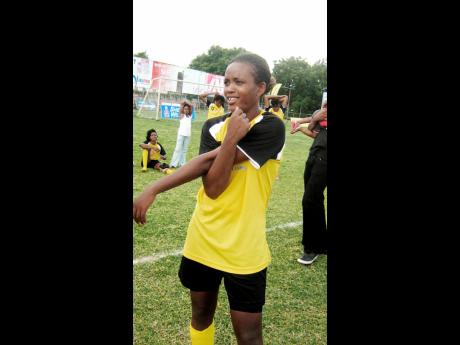 Former Jamaica women’s football star Tashawna Vincent says it’s her lifelong ambition to work with the sports governing body FIFA and is glad she has been able to realise that dream after being selected by the Jamaica Football Federation (JFF) to represent the nation as one of FIFA’s Legend squad members on the FIFA Women’s World Cup trophy tour.

The FIFA Legend squad members include 23 men and women who will represent their countries on a two-month FIFA Women’s World Cup trophy tour to the respective qualified nations. The tour commences on February 24 in Paris and ends on April 2 in the same city, and Vincent was over the moon after she was named by JFF president Michael Ricketts as Jamaica’s representative.

“I was contacted by the president and the general secretary (JFF) saying that I was chosen, so it was a joint decision by both FIFA and the JFF. So I must thank the president for having the confidence in me to go and represent, not just myself, but the Jamaica Football Federation and Jamaican football worldwide. This is a life- long dream of mine to work with FIFA. I always knew I would work in football whenever I stopped playing and represent the country in a different capacity,” she said

The FIFA Legends is a group of past and current players, 13 females and 10 males, who are given superhero names and identities with powers to match, and Vincent is overwhelmed by the opportunity.

“Each legend has their own name and own super power, mine (superhero name) is Electric Dash. We (legends) will be travelling to different countries worldwide as the trophy tour continues. We will be FIFA special guests at the trophy viewing and we will be contacted individually for tours to the 24 countries that qualified,” she reasoned.

Vincent, one of, if not the most prolific female striker locally for over the last 10 years, said that many persons have tried to give the impression that some former players are sour about the Reggae Girlz World Cup qualification because of their failed attempts or because the senior women’s programme was disbanded for almost a decade, but she said that couldn’t be further from the truth.

“We knew we would have done that (qualify) at some point in time and I am happy Khadija (Shaw) and the players could get it done.

I am ecstatic as this is a long time coming. But I don’t want persons to think that as past players, we are not (happy) because this was what we (former players) worked for. I spoke to players here and abroad who are retired, and they, too, are happy.

And now, we have former players coming in as managers, coaches, and everything has been modernised, and we are improving every year,” she added.

The FIFA Women’s World Cup trophy tour makes it second stop in Montego Bay tomorrow. This will be followed by stops in Chile (7th), Argentina (9th), Brazil (11th), and three stops in the USA before ending in France on May 2.