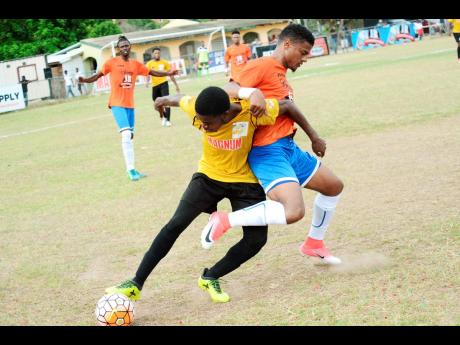 Defending champions Barbican FC will look to maintain their front-running position against a Real Mona aggregation desperate to rebound, when they meet in the closing game of the Magnum KSAFA Super League Zone A double-header at Constant Spring Complex today at 8:30 p.m.The opening match, which is slated to begin at 6:30 p.m., brings together Constant Spring FC and Maxfield Park FC.

Having racked up three wins and a draw in four matches, Barbican have set themselves firmly on course for their title defence. Their latest win came last weekend when Malik Douglas and Maurice Wilson scored to hand them a 2-0 win over Constant Spring last weekend.

Real Mona FC, on the other hand, are among a trio of teams with the second highest number of points, seven, after each scored two wins, one draw, and a loss. Real Mona FC suffered defeat in their prior fixture, going down 2-1 to Meadforest last weekend. That result pushed them back to fourth in the standings, on goal difference. Still, they are well ahead of the bottom two, Maxfield Park FC, with two points and Constant Spring, who have lost all four games.

Thus, either team will view their confrontation as a decent chance to not only kick-start their season, but nab their first win.

Constant Spring FC, who earned promotion after advancing to the Major League final last season, have found the going very difficult at Confed level and have suffered largely through tactical indiscipline.

Coach Gregory Walters had noted fitness as a concern ahead of last week’s loss, but they still appeared out of their depth and need to do much more to acquire results of a competitive nature.

On the other hand, Maxfield Park FC, with new coach Peter Brown, have shown greater capabilities to draw half of their games this season. Still, they are yet to record a win and will view this contest among their best chances.

The feature sees second-placed Olympic Gardens facing Seaview Gardens at Cling Cling Oval. Olympic have won twice and drawn once to tally seven points, one more than Seaview, who have won two and lost once in three outings.