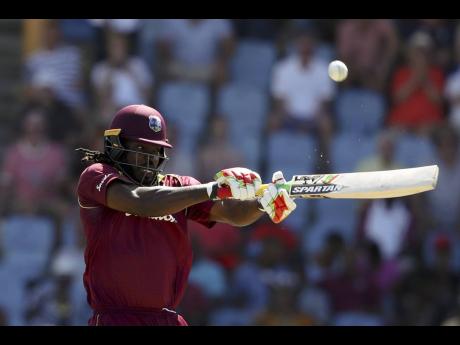 Man-of-the-Series Chris Gayle plundered the fastest One-Day International 50 by a West Indian after Man-of-the-Match speedster Oshane Thomas’s had demolished England for a record low as West Indies pulled off an emphatic seven-wicket victory in the final ODI here yesterday to level the five-match series 2-2.

Choosing to bowl first on a lively pitch at the Darren Sammy National Stadium, West Indies bundled the world number-one side out for a paltry 113 in the 29th over – their lowest ever ODI total against West Indies – with the 22-year-old Thomas snatching a career-best five for 21 from just 31 balls.

Veteran Gayle then erased any doubt over the result by storming to a 19-ball half-century en route to an amazing 77 from just 27 deliveries as the hosts eased to their target in the 13th over.

The 39-year-old, in his farewell Caribbean tour, clobbered five fours and nine giant sixes in what was his fourth score over 50 in the series. He finished with 424 runs at an average of 106.

“It was a fantastic series to be able to tie the series two-all. I thought both teams played well,” Gayle said afterwards. “Today, our bowlers were fantastic, so you have to give credit to them.”

Inspirational captain Jason Holder, who oversaw West Indies’ recapture of the Wisden Trophy in the preceding Test series, said the way his side held their nerve throughout was satisfying.

“That was the perfect performance. All of the bowlers put in an outstanding effort. Oshane is an impact player for us, and it’s good to see him make this breakthrough,” Holder said.

“He was quick, aggressive, and consistent, and he caused trouble. It’s been a total team effort with the ball, and then Chris stole the show at the end. Chris is a champion. It’s great to see him bow out in the Caribbean like this.”

Gayle smashed 14 runs from the first over from Chris Woakes and took another 23 runs from the seamer’s second over, including three massive sixes.

John Campbell, almost unnoticed amid the carnage, played around a full-length one from speedster Mark Wood and was bowled for one in the fourth over.

But Gayle kept up his savagery in Wood’s next over, smashing the bowler for a pair of leg-side sixes before sprinting a single to cover to raise his half-century.

With the result all but assured, Gayle opted for full-scale entertainment. He twice cleared the off-side boundaries off the first two balls of the eighth over from Wood before finding the boundaries on either side of the wicket with the next two deliveries.