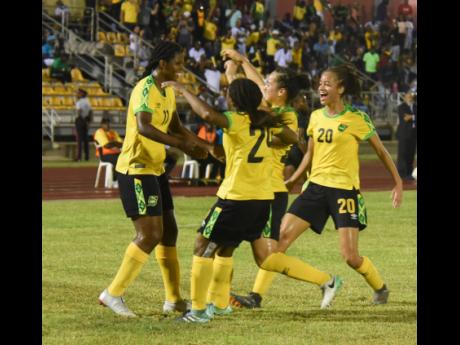 Ashley Anguin
Jamaica's Khadija Shaw (left) is congratulated by some of her team-mates after scoring in Jamaica's 3-2 win over Chile in a friendly international at the Montego Bay Sports Complex on March 3, 2019. Shaw scored twice for the Reggae Girlz.

Jamaica's Reggae Girlz came out on the right side of an exciting 3-2 result over Chile, to close out their back-to-back assignments with the South Americans with another victory.

Fresh off their 1-0 win on Thursday inside the National Stadium, the Jamaicans (53rd ranked) again managed to get the better of the higher-ranked Chileans (38th) in their friendly international, this time in front of a rocking crowd at the Montego Bay Sports Complex.

Hotshot striker Khadija Shaw helped herself to an impressive brace, with goals in the 23rd and 32nd minutes, with young star Jody Brown sealing the win in the 76th minute of play. Maria Jose Rojas (21st) and Karen Araya (58th), did the damage for the visiting Chileans.

In fact, Rojas could have gotten her name on the scoresheet as early as the second minute of play, after turning her defender inside the box, but she saw her well-worked effort barely miss Nicole McClure's left upright.

Shaw too, almost scored before she actually did, when her shot was cleared off the line, after she out-muscled her marker, cut inside the box and placed her shot beyond a desperate dive from Chile goal-keeper Natalia Campos in the ninth minute.

However, fans did not have to wait much longer for the opening goal, even if it came from the wrong team as far as most inside the venue would have been concerned, when Rojas got on the end of a low cross from Rosario Balmaceda on the left flank to tap into the net from close range with 21 minutes played.

Two minutes later, Shaw showed why she is seen as one of the most exciting players heading to the FIFA Women's World Cup, after brushing off her marker, before cutting inside and calmly slotting her shot into the back of the net to equalise.

However, like they did on Thursday, Chile started the second half in the ascendancy, threatening the hosts in the 55th minute, when McClure was forced to make a brilliant save to deny Yessenia Lopez, who met a cross powerfully at the back post.

They were, however, rewarded for their efforts when midfielder Araya's stunner not only surprised McClure, who would have needed a ladder to make a save, but also the entire stadium, which went into silence as the visitors wheeled off in celebration.

The Jamaicans were forced to roll up their sleeves, as the Chileans, who are also heading to the FIFA Women's World Cup this Summer, set up camp in the Jamaican half. They were, however, unable to penetrate the hosts' backline, with captain Konya Plummer and Cachet Lue holding the fort.

Brown's introduction in the 71st minute brought loud cheers from the Jamaican fans and the 16 year-old St Ann native took little time to repay the support, arriving at the backpost to tap in and finish off a brilliant play from Denesha Blackwood, securing an exciting win for the Reggae Girlz, who will continue their preparation for this summer's spectacle.