‘Better with 10’ - Portmore edge UWI despite losing a player 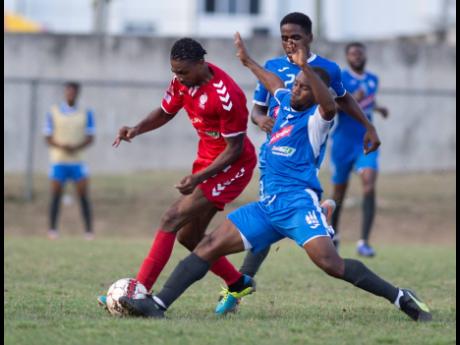 Portmore United’s head coach, Shavar Thomas, said he was never worried by his team going down to 10 men after their eventful 1-0 win over high-riding UWI in the Red Stripe Premier League (RSPL) at the UWI Bowl yesterday.

Javon East got the game’s only goal from the penalty spot 16 minutes from time, and eight minutes after, they were reduced to 10 players following the ­ejection of Damano Solomon for a brutal tackle on Akeem Thenstead.

“In the first half, it was an even game, but I thought when we went a man down, our quality rose, the level of our play rose, and our intensity rose. Everyone was just working for each other,” Thomas said.

“In the pregame, we talked about what it would take to win this game, and what you saw in the last 20-25 minutes was what we spoke about. We also thought that everybody has to win their duels, and we did just that, and everybody has to make a play, and it was no different when you saw our young keeper (Benjamin Williams) making a save from that penalty.

“But I would rather have 11 versus 11, although we are confident in the physical work that we do. These guys push each other every day, and this is something we are accustomed to. We do these things in practice, we let one team play with 10 men and see how they will react to going a man down, so when we go down a man in a game, it’s nothing new,” he commented.

In the first half, it took two brilliant saves from goalkeeper Amal Knight to keep the visiting Portmore at bay, with his UWI dominating possession but failing to really trouble Williams in the Portmore goal.

After the break, Portmore continued to get close, but they received a major blow when Solomon chopped down Thenstead on a fast break and was red-carded. But going down to 10 men hardly affected the champions, as they defended more resolutely and looked even more dangerous in attack. On one of those attacking moves, East found himself in on goal before he was brought down in the box by Knight for a penalty. The striker got up, dusted himself off, and convert the resulting penalty kick despite a strong hand by Knight.

Five minutes from the end, the hosts had a great chance to earn a point when they themselves were awarded a penalty after Andre McCarthy’s shot was handled inside the box. However, McCarthy, who took the penalty himself, could not beat Williams from 12 yards and Portmore held on for the three points, which put them on 59 points, eight points clear of second placed Waterhouse, who face rivals Arnett Gardens in tonight’s game at Drewsland.

“Going forward, it’s about putting points and distance between us and the people who are close to us, and it’s good for our confidence and trying to lock up first place,” Thomas added.

UWI stayed fourth in the standings, with 42 points, while Montego Bay United scored a major win in their fight for survival as they beat Reno 2-1 to at least temporarily join 10th-placed Harbour View on 27 points. Harbour View were down to play Tivoli in a late game.