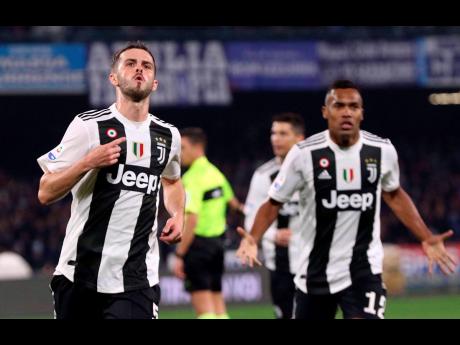 Cesare Abbate
Juventus’ Miralem Pjanic (left) celebrates after scoring his side’s opening goal during the Serie A match between Napoli and Juventus at the San Paolo stadium in Naples, Italy, yesterday. Juventus won 2-1.

Two red cards and a late penalty miss contributed to a dramatic match at the Stadio San Paolo yesterday, as Juventus beat Napoli 2-1 to continue their seemingly unstoppable march to a record-extending eighth successive Serie A title.

Juventus appeared to be cruising when they went in at half-time 2-0 up and with a man advantage after Napoli goalkeeper Alex Meret was sent off for a foul on Cristiano Ronaldo.

But Miralem Pjanic – scorer of the first goal – was also dismissed at the start of the second half, and Jose Callejon pulled one back for second-placed Napoli.

Lorenzo Insigne hit the post with a penalty six minutes from time, but Juventus extended their Serie A lead to 16 points.

The match turned in the 28th ­minute when Ronaldo intercepted Kevin Malcuit’s poor back pass and went down on the edge of the area as Meret came rushing out to challenge.

Although it was debatable whether Meret touched Ronaldo, referee Gianluca Rocchi showed a straight red card to the Napoli goalkeeper for his recklessness as it denied a clear scoring opportunity.

Pjanic curled the resulting free kick into the net and Emre Can doubled Juve’s lead 11 minutes later with a close-range header.

Napoli were given a way back into the match when Pjanic was shown a second yellow card for handling two minutes into the second half.

The hosts reduced the deficit in the 61st, as Callejon got ahead of the Juventus defenders to tap in Insigne’s cross.

Napoli laid siege to the Juventus goal and thought they had got their rewards when they were awarded a penalty for an Alex Sandro handball, but Insigne’s effort rebounded off the post.

Fabio Quagliarella added another memorable chapter to his spectacular season by scoring two goals and hitting the woodwork twice in Sampdoria’s 2-1 win at Spal.

Quagliarella netted with an acrobatic volley from 10 yards after four minutes. Then he rose above a defender for a textbook header to add another goal seven minutes later.

The 36-year-old forward made it 19 goals this season, matching Cristiano Ronaldo atop the Serie A scoring chart.

Every Serie A match this weekend was interrupted in the 13th minute to remember Fiorentina captain Davide Astori ahead of today’s first anniversary of his death from a cardiac arrest at the age of 31. The defender used to wear the No. 13 shirt.

Several players were in tears yesterday as applause rang out from both sets of fans and banners were displayed in tribute to Astori, who was from near Bergamo – where Atalanta play their football.

Torino moved into contention for the Europa League places with a 3-0 win over last-placed Chievo Verona.