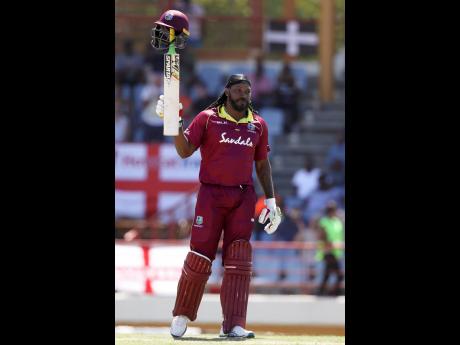 West Indies’ opening batsman, Chris Gayle, said despite not coming into the One-Day International (ODI) series against England in form, he never doubted his ability to score runs.

The 39-year-old Jamaican was named Player of the Series after amassing 429 runs in four matches at an average of 106.

While he admitted he had been struggling in various T20 leagues across the world prior to the start of the series, Gayle said he always believed he would score runs.

“If it’s one thing about me, my mindset is that even when I’m 60, I still think I can do it. I feel that when I reach age 60, I can still go up against the best bowlers in the world and still score runs. That’s how I feel,” the powerfully built opener said.

“That mindset will never change, it’s just the body that is the worrying part for me.”

In the last ODI, Gayle raced to a half-century off just 19 balls, the fastest ever by a West Indian in an ODI.

He also smashed 39 sixes, the most ever in a bilateral series.

But even as he contemplates retirement, Gayle said his performance in the series was expected.

“It’s not a surprise to me. This hitting just comes naturally to me, to be honest with you. In T20, I hit a lot of sixes as well, but this is the first time getting 39 sixes in a series, and honestly from a personal point of view, at age 39 as well, I’m very happy,” Gayle said.

His performance helped the Windies tie the ODI series and, according to Gayle, it was one of the best feelings in the world.

“It was a fantastic feeling to be able to tie the series two-all. I thought both teams played well. Today (Saturday), our bowlers were fantastic, so you have to give credit to them. Oshane (Thomas) did a great job, and [I am] happy for him to get his first five-wicket haul for West Indies.”