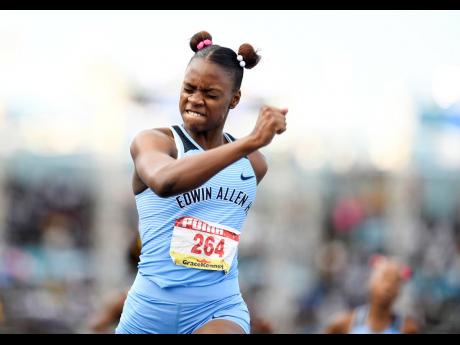 Along with double World Under-20 champion Briana Williams, Kevona Davis of Edwin Allen is one of Jamaica’s brightest young sprint prospects. Her coach, Michael Dyke, is bringing Davis along slowly in 2019, with a view of keeping her healthy. Speaking after the young sprinter won the Class Two 200 metres at Central Championships, Dyke said he was happy with her progress.

Davis zipped home in 23.24 seconds to win gold in what was only her second individual effort of the season.

It was a performance that Dyke was satisfied with.

“She’s okay, she’s coming on. We’re not rushing her,” said Dyke. “We’re taking our time to ensure that she remains healthy, because that’s my main objective.”

Now 17, the young speed merchant ran 11.16 and 22.72 seconds the 100 and 200 metres, respectively, to establish Class Two records at the ISSA/GraceKennedy Boys and Girls’ Athletics Championships last year but succumbed to injury before the World Under-20 Championships.

At Central Championships, Davis ran only the 200m.

“She ran two 200s, which was enough for the championships, so that’s enough until we probably move on to the Digicel Grand Prix final.”

That event is embedded in the GC Foster Classic and is scheduled for March 16.

Speaking more generally, Dyke was also pleased with the performance of his Edwin Allen squad during the two-day Central Championships.

“Coming from Gibson Relays into Central Championships – because when I look at the spread that we had, we basically weren’t doubling persons as such, so we probably figured it would have been a little bit tight,” he conceded.

He was right; Edwin Allen managed to hold off a strong Hydel High School team by 20.5 points – 366 to 345.5 points. Nevertheless, the Edwin Allen team performance has made Dyke more positive about the upcoming Champs title defence, which run from March 26 to 31.

“Things looking good, and you know, we’re rounding into the sort of form that we would like to be, come March 26,” he resolved.

One area of early concern was the sprint hurdler, but at Central Champs, his hurdlers held their own, with Santae Wilson shining in Class Four.

“We still have some gaps,” the six-time Champs-winning coach ­said. “But I think where we’re at, we can fix what needs to be fixed before the Championships.”

Edwin Allen are going for a sixth straight Girls’ Championships title and a seventh overall.