‘I want to be world-class’ - Tracey - Ambitious sprinter outlines goals 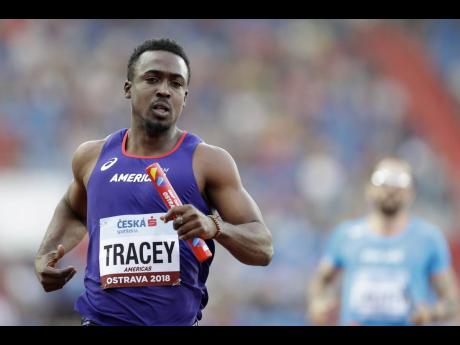 When Tyquendo Tracey won the 100 metres at the National Senior Championships, the North American Central American and Caribbean Championships, and the Athletics World Cup last year, it was the fulfilment of a dream. Tracey says he always wanted to develop into a world-class sprinter. Having overcome several setbacks in the past, he sees success in his future.

Tracey first emerged when he won the Class One 100 metres for Garvey Maceo High School at the 2012 staging of Central Championships. Speaking late last month in Kingston, he says that was when his dreams began.

“Yes, I’ve always wanted to be a world-class athlete,” he said following a 2018 season that saw him break 10 seconds in the 100 metres for the first time. “I’m really beginning to see all these dreams that I’ve had, all these daydreams, all these ‘night dreams’ if I should say, everything is basically unfolding, and I’m liking it.”

“Right now, it’s just to work hard and make these dreams really, really what I’ve exactly been looking at all my life”, he explained.

The hard work is taking place in Jacksonville, Florida, these days, with Tracey having departed from the MVP Track Club, where he was based after leaving Garvey Maceo. His training partners include Briton Adam Gemili, Canada’s 2016 Olympic silver and bronze medallist Andre DeGrasse and his fellow 2012 World Under 20 4x100m relay silver medallist, Senoj-Jay Givans of Jamaica.

“He’s an awesome dude”, the 25 year-old says of coach Rana Reider. “That’s just one of the first words that come to my mind when I think about my new coach.”

Reider coached Dafne Schippers through a transition from the heptathlon to a World Championships 200-metre title in 2015 and directs the athletic affairs of triple jumper World and Olympic champion Christian Taylor. With Reider keeping watch, Tracey hopes to improve.

“For me, it’s like basically the first 40 metres, 40-50 metres. My transition has always been horrible, so that’s my main focus right now”, said the man who clocked 9.96 seconds last season. “Everything else, I’m working on just as hard, but the focus is on my transition.”

Like most athletes, he has had bouts of injury, but he was especially unlucky at the 2015 World Championships.

A collision with a teammate struck him down as the team warmed up for the 4x100 metres preliminary round. The team won the heat and the final without him.Despite those troubles, Tracey has improved steadily since leaving Garvey Maceo with a personal best of 10.54 seconds. He ran 10.14 in 2015 and 10.12 in 2017 before twice going under 10 seconds in London on July 21, 2018. Though pleased, the ambitious Jamaican hoped for better.