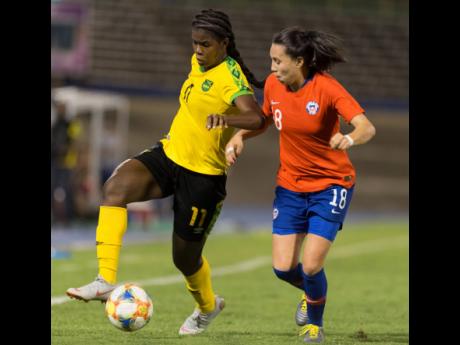 This follows her performance in Sunday’s 3-2 win over Chile at the Montego Bay Sports Complex, in their second and final friendly international contest.

Shaw, who terrorised Chile’s backline but failed to score in the first game last Thursday at the National Stadium, bagged a brace in the Second City, with goals in the 23rd and 32nd minutes of play, to hand the Jamaicans the win in an exciting showdown.

Jody Brown (78th) came on as a substitute to score the winning goal for the hosts, while Maria Jose Rojas (21st) and Karen Araya got the goals for the South Americans.

“We have match winners and we know Khadija is a very special player, just finishing college and about to turn pro. She is possibly one of the deadliest strikers in the world at this time. We just want her to continue to grow, so that she can continue to assist the team,” said Price, who also singled out 16-year-old Brown for special mention.

“What can I say about Jody Brown, who continues to develop as a good 16-year-old playing well? She came on and scored the winner for us tonight and always score some important goals. We just want the team to continually develop and do well,” Price added.

Price believes the girls applied themselves well and said the two-match series provided more clarity on the areas that need to be addressed going forward.

“It’s a work in progress. It’s the first time we have gotten together since November of last year. I think they acquitted themselves pretty well playing against a Chile team that is ranked 34 in the world. They (Chile) were beaten 2-1 recently by Italy, who is going to be playing in our group. With that said I think this two-match series was a good barometer to see where we were and I think we did pretty well.

“There are still some things that we need to iron out, but with more time we will work out those things,” Price shared.

Both teams were using the games as part of their preparation for this year’s FIFA Women’s World Cup tournament, which will be held in France in June.

The Reggae Girlz are drawn in Group C alongside Australia, Italy, and Brazil.