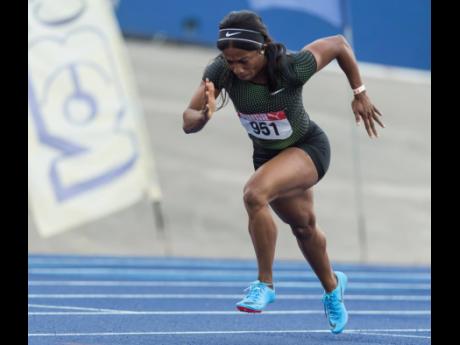 Gladstone Taylor
Shelly-Ann Fraser-Pryce competing in the senior women’s 400m at the John Wolmer Speed Fest held at the National Stadium on Saturday.

“Just expect the old Shelly-Ann, or even better, who knows, because I am excited about the progress and I am looking forward to it.”

Those are the words of two-time Olympic gold medallist Shelly-Ann Fraser-Pryce.

The 32-year-old Jamaican sprinting star, who made a return to the track last season after missing the 2016-2017 campaign, due to pregnancy and the birth of her son Zyon, is looking ahead with confidence and has set her sights on again dominating her peers at this September’s World Championships in Doha, Qatar.

This, after she stepped up her preparations with a 400m run at Saturday’s John Wolmer Speed Fest inside the National Stadium.

Fraser-Pryce, who, along with her MVP Track Club stablemate, Elaine Thompson, share the national 100m record of 10.70 seconds, told The Gleaner that her expectations are very high going into the season.

“It (the season) has been progressing good, I can’t complain,” said Fraser-Pryce.

“I have been taking it a day at a time. Coming back, it is going to be a big year regardless, and so I just want to have a good season, to be honest,” she said. “I have been working hard and just putting my best foot forward.”

Fraser-Pryce, a three-time World 100m champion, showed in her return last year that she can still produce fast times after ending 2018 with a season best of 10.98 seconds in the 100m, with five other times registered under 10.15 seconds in her 11 races.

The sprinter noted that despite her remarkable achievements over the years, she remains determined to continue producing great times and results and is looking forward to more success this season.

“For me, I have accomplished so much, but I believe there is a lot is more to achieve and so I am looking forward to giving that more that I have and hoping for the best,” said Fraser-Pryce, who finished seventh overall in the women’s 400m in 55.07 seconds on Saturday. Fraser-Pryce added that she was very pleased with her efforts in the 400m.

“I am tired but I feel good. I came out here and did the 400m, it is hard, but I did my best and I am just glad that I came away injury free and I am happy with the time,” Fraser-Pryce noted.

That was the sprinter’s second outing this season, after her 7.21 second run in the 60m at the Queens Grace Jackson Meet in late January.