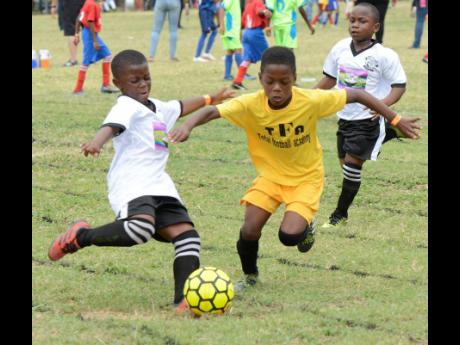 Ian Allen
Conner James (centre) from Total Football Academy, is challenged by Zack Wright from Norbrook Strikers during the Victory Cup youth football competition, which was held at Shortwood Teacher’s College on Saturday. Looking on is Norbrook’s Didier Dunbar (right).

Gregory Jones, organiser of the Victory Cup youth football competition, which was held at the Shortwood Teachers’ College on the weekend, said that including the Under-eight category in the tournament proved a major success and he hopes to find a bigger, more accommodating venue to host even more teams next year.

“This is the sixth year, but this is the first year we are combining u6 and U8s, normally, it’s a U6 competition. The coaches asked for the inclusion of the U8 and we started it this year because the boys eight and under didn’t have anything to do. So we combined the U6 and U8 and called it Victory Cup,” Jones said.

Twenty-six teams entered the tournament, ten of them competed in the U6 competition and 16 contested the U8 tournament. It was a round robin format for the first round of both competitions. The under-six was split into two groups of five, while the U8s were divided into four groups of four teams. After the first round the top two teams from each group in the U6 advanced to the semi-finals, while the top two from each of the four groups in the under-eight progressed to the quarter-finals.

After the first round, a knock-out format was employed for the one-day tournament. In the U6 semi-finals, St Joseph’s defeated Torrington Early Childhood Institution and Emmanuel Christian Academy turned back Ballaz to earn their places in the final, where St Joseph won on penalties.

In the U-8 group, Emmanuel Christian Academy beat Lannaman’s Prep in one semi-final, while Norbrook Striker stopped Ballaz in the other. Emmanuel then defeated Norbrook for the title. But so overwhelming was the interest and response for participation this year that Jones hopes he can accommodate more teams next year.

“We had to tell some teams we couldn’t accept them this year because we didn’t have enough space, but the day went well, all the games started on time. The winner of the u6, St Joseph was entering for the first time, and Emanuel defeated Norbrook Strikers 2-1 for the U8.

“This is grass roots, this is youth development. A lot of academies are springing up because of competitions like these, the kids have programmes that they train with, then they come and showcase their skills. We want to give the kids an opportunity to come out and play,” he said.

“The event was a success this year, we expanded it and the support and response was overwhelming, but we need a bigger venue.

We need somewhere bigger where we can facilitate more teams.”

Emmanuel’s Dejaun Harley was top scorer and MVP for the U6 tournament. Norbrook’s Zachary Wright topped the scoring in the U8 competition, while Emmanuel’s Jude Davis was the MVP.