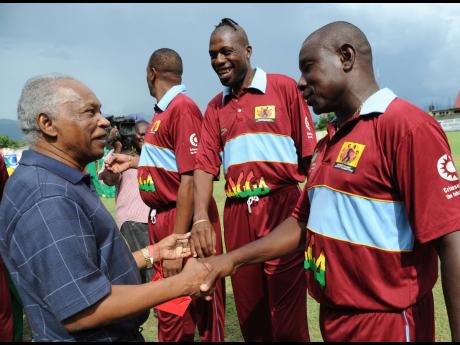 The table tennis fraternity last saw Tony Becca in September at the 60th Caribbean Championships. In that moment, table tennis had its most watchful eyes zoomed on to Jamaica’s latest battles against the region’s best. With a Red Stripe in hand and one leg folded over the other, Mr Becca focused his well-trained eye on those who carried the mantle of Orville Haslam, Fuarnado Roberts, Stephen Hylton, Monica deSouza and Anita Belnavis.

His study was interspersed by warm greetings from former national players like Winston Cowans, Evan Williams, David Marshalleck and Colin McNeish. It was a grand reunion. More than that, it was a mark of how well regarded he was by those whom he used to write about.

His love of cricket is well known, but his coverage of table tennis is a big part of the legacy he leaves behind.

The image of him at the National Arena last September brings back memories. In recent years, his weekly column was the only chance to see a master writer at work. In an earlier era, the Becca pen brought table tennis to life in The Gleaner and the now-defunct Daily News.

News of his death came as a shock to those who read his column on February 25. Most likely, they had been reading him for decades.

In those bygone days, one young scribe learnt how good Mr Becca was. Fans saw them watching the same tournament 30 feet away from each other. The greenhorn watched and scribbled into his notebook, presumably itemising details of a pivotal match. Becca simply watched and sipped his beer.

When the two stories were published in rival newspapers, the maestro’s account had pulled the reader into the seat beside him with all the detail the youngster had PLUS important historic footnotes, vivid descriptions of key points and thoughtful insights on style and tactics.

It was a lesson from an expert.

For those of us who saw his last column, his death is a shock. If the truth be told, Mr Becca’s column had become compulsory reading for the inquiring mind. He informed, educated and entertained us all each Sunday with his commentaries on cricket and the world of sport in general.

He was more than just a watcher. His Milo Melbourne Cricket Festival brought West Indies players face to face with young débutantes to teach and inspire them. In table tennis, he made sure Melbourne fielded a team in the local leagues, and did as much as anyone to revive Business House competition.

On top of all that, he was an authority on all sports. Cricket was just lucky that he loved it more.

One of the most telling tributes to Mr Becca came from 1991 national champion Randy Fagan on Facebook. Randy recalled his days under Mr Becca’s scrutiny and wrote, “Despite his small stature, he was a giant of a man.”

That’s how the table tennis fraternity will remember Tony Becca. As a writer, he was fair, articulate and accurate. As a man, he was warm, engaging and kind. On both sides of that job/man dichotomy, there was much to admire and emulate for players and young scribes alike.

Like the man said, Tony Becca was a giant.