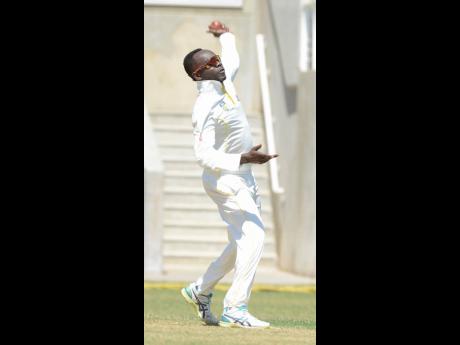 The Jamaica Scorpions will host a Barbados Pride team that features the addition of some in-form players who were recently on West Indies duty in the Test and ODI series versus England in the Caribbean. West Indies players Roston Chase, Shane Dowrwich, Sheldon Cottrell, and Kraig Braithwaite, along with Windies ‘A’ pacer Chemar Holder are in the line-up for the Pride in the Regional Four-day Championship match which starts at Sabina Park today at 10:30 a.m. Four changes have been made to the Scorpions squad, which lost to the Leeward Islands Hurricanes last week. Gordon Bryan, Reynard Leveridge, Alwyn Williams, and Oraine Williams have made way for the inclusion of Derval Green and Jerome Taylor, who were both out due to injury, along with Garth Garvey and Nicholson Gordon, who have both been in form with bat and ball, respectively, in the current Senior Cup season.

Scorpions head coach Robert Haynes said: “it is good that we can reward the good form displayed by players in our local competitions by including them in first class games. Garvey and Gordon have been delivering consistently well with the bat and ball in the Senior Cup. We need consistency and discipline when at the crease in both innings. We win when we execute our plan. It’s that simple. The bowling gets the job done, we must also deliver with the bat.”

There is also a temporary adjustment in the Scorpions’ coaching department – Robert Turner, the coach of the Super League champion Central Titans, has been appointed as assistant coach for the game against the Pride.

This match-up will mark the milestone of 100 first class games for spinner Nikita Miller. The St Elizabeth Technical product who plays for Melbourne CC, says he’s excited to take the field and challenge the Pride. “My focus is always on the next game. All I want to do is deliver at a high level to make the team competitive. This game versus Barbados will be no different.

The aim is to get wickets through efficient bowling,” he said.

The Scorpions are at the bottom of the points table. Guyana Jaguars lead the table with 136 points. They are followed by the Leeward Islands Hurricanes (110.8); Barbados Pride (96) and Windwards Volcanoes (86); Trinidad & Tobago Red Force (85.6), and the Jamaica Scorpions, 82.4.