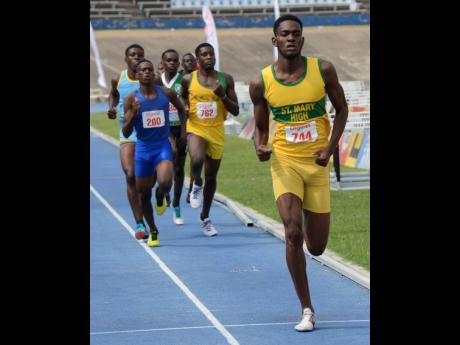 Ian Allen
Clayon Cooper (right) of St Mary High wins the Class One boys’ 800 metres final ahead of his teammate, Joshua Smiley (centre), and Jerome Hinds (left) of Glengoffe High on Tuesday’s final day of the 2019 Eastern Athletic Championships at the National Stadium.

St Mary High School were the toast of the Digicel Eastern Athletics Championships on Tuesday at the National Stadium as they topped the two-day meet with a combined 691.5 points after winning both male and female titles. Both winning teams walked away with $250,000 each courtesy of Digicel in the penultimate meet of the Grand Prix series before next Saturday’s grand finale at GC Foster College.

Class Three athlete Shone Walters, who has shown good form all season at the various development meets across the island, was one of the stars for the champions as she lifted the 800m, 1500m double with the former in a record 2:18.61. It was one of seven records broken by her team at the meet as she showed that she could be a medal contender at the ISSA/GraceKennedy Boys and Girls’ Championships later this month.

Walters’ teammate, Danielah Gardener, was also among the record breakers. She produced a winning distance of 5.70m to take the Class One long jump. It closed a double for her after she earlier captured the high jump on Monday.

Titchfield surprised the champions in the Class Four girls’ 4x100m as they won in a record time of 49.66 seconds. The champions also captured the 4x 400m Open relay.

Also among the record breakers on the girls’ side was Alexia Austin of Glengoffe High, who had a winning time of 11.83 seconds in taking the Class Three 80m hurdles.

Port Antonio High’s Jamani Smith was also a big winner in Class One as he took the 400m hurdles in 58.51 seconds.