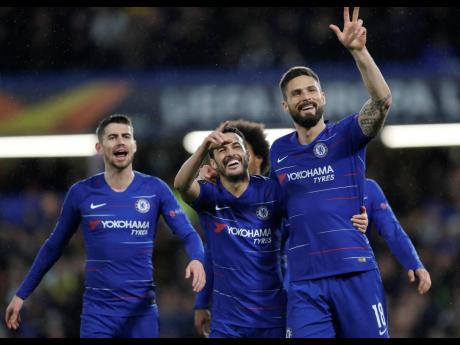 AP
Chelsea’s Pedro Rodriguez (centre) celebrates with his teammates Olivier Giroud (right) and Jorginho after scoring the opening goal during the Europa League round of 16, first-leg match against Dynamo Kyiv at Stamford Bridge stadium in London yesterday.

Chelsea closed in on the Europa League quarterfinals with a 3-0 win over Dynamo Kiev yesterday while Arsenal and Benfica will have to overturn deficits in the second leg of their round-of-16 matches to advance.

Pedro Rodriguez, Willian, and Callum Hudson-Odoi scored a goal apiece for Chelsea, who were in full control throughout and easily could have translated their dominance into more goals. It was the third win in three games in all competitions for Chelsea as coach Maurizio Sarri has managed to turn things around after a string of poor results.

Fellow London club Arsenal, though, is in trouble following a 3-1 loss at Rennes. The French club rallied from an early deficit after Arsenal was reduced to 10-men to spoil goalkeeper Petr Cech’s return to the city, where he spent two seasons early in his career.

Arsenal took the lead through Alex Iwobi after just four minutes, but the game turned when Sokratis Papastathopoulos was sent off late in the first half and Rennes equalised from the resulting free kick.

The 36-year-old Cech, who is retiring at the end of this season, made some great saves against the attack-minded home side but couldn’t do anything to prevent his former club from building a massive advantage ahead of next week’s return leg at the Emirates.

Former European Cup winner Benfica will also need a comeback after losing 1-0 at Dinamo Zagreb, and there was another surprise in Spain, where Slavia Prague held five-time Europa League champion Sevilla to a 2-2 draw.

Napoli cruised past Salzburg 3-0, and Valencia beat Krasnodar 2-1, while high-scoring Eintracht Frankfurt was held to a 0-0 draw at home by Inter Milan.

Also, Villarreal struck twice in the second half to earn a 3-1 away win at Zenit St. Petersburg.

Sarri made six changes from Sunday’s 2-1 victory over Fulham, and two of those players made the difference in the first half.

Olivier Giroud, who scored six goals in the previous five Europa League games, set up Pedro with a brilliant back-heel pass in the 17th minute for a well-deserved lead.

Pedro squandered more chances as Dynamo had no answer to Chelsea’s dominance.

Willian added the second in the second half, curling in a free kick from outside the area before Hudson-Odoi finished it off in the final minute.