Dalton Myers | Still more to be done for women in sports 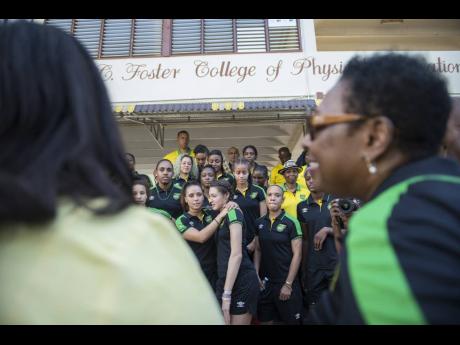 Gladstone Taylor
Minister of Culture, Gender, Entertainment and Sport Olivia ‘Babsy’ Grange (right) looks on as Opposition Spokesperson on Sport Natalie Neita (left) addresses members of Jamaica’s national senior women’s football team at the GC Foster College of Physical Education and Sport in Spanish Town, St Catherine, on Saturday, December 15, 2018. This was during one of various stops on the route of celebration in honour of the team’s qualification for the 2019 FIFA Women’s World Cup.

Yesterday was celebrated as International Women’s Day (IWD) under the theme #BalanceForBetter. This theme is relevant for the sporting industry, and as Phumzile Mlambo-Ngcuka, UN under-­secretary-general and executive director of UN Women, declared in her statement marking the occasion, this theme “puts innovation at the centre of efforts to reflect the needs and viewpoints of women and girls and to resolve barriers to public services and opportunities”. IWD not only forces us to reflect on the achievements of women in sports, but also calls on each of us to do more to promote and encourage the advancement of women in the sport industry.

It is important that we acknowledge and laud women for the role they play in the development of sport. We don’t do this enough, and IWD is yet another opportunity for us to discuss the role of women and girls in a space that is still considered a ‘man’s world’. Globally, there has been increased recognition for the work of women in sport, and more effort is being placed on gender parity. There is a concerted effort to include more women in boardrooms and engage more girls in active participation.

The International Olympic Comittee’s (IOC) Olympic Agenda 2020 strategic roadmap prioritises gender equity. The Gender Equality Review Project also ­outlines 25 recommendations, which the IOC believes will address the gender gap in sports. Of these 25 recommendations, nine are for international federations (IFs) and national Olympic committees (NOCs) to take the lead, hence ­putting the onus on these ­bodies to ­implement projects geared towards ­gender equity and ­equality in sports.

At FIFA, there are also ­programmes geared towards empowering girls and women in sport. FIFA launched its first Global Women’s Football Strategy, which examines the current state of play and identifies ways in which that world governing body can ­positively influence women in football. These include, but are not limited to:

- Increasing the number of member associations with women on their executive committees,

- Facilitating a 100 per cent increase in the number of ­women’s youth leagues,

Importantly, in October 2018, FIFA announced an overall increase of US$50 million in financial contributions to the 24 teams, including Jamaica’s Reggae Girlz, who will be playing in this year’s Women’s World Cup in France. This amount more than triples the US$15 million paid to teams for the 2015 edition.

However, we still have a far way to go.

The 2018 World Bank Group ­report Women, Business and the Law: A Decade of Reform indicated that only six countries currently give women and men equal rights. These countries – France, Luxembourg, Belgium, Sweden, Denmark, Latvia – scored full marks of 100. Jamaica recorded a score of 68.13 in the bank’s report, which examined how effective countries are in guaranteeing legal and economic equality for women. This means there is still progress to be made for women in general, and since there are challenges in the legal and economic framework, guaranteed gender equality in sport might be difficult.

Additionally, the 2018 women in sport report entitled Beyond 30%: Workplace Culture in Sport indicated that approximately 40 per cent of women experience gender discrimination within their national governing bodies (NGBs) in England and Wales. Approximately 38 per cent of the women interviewed also indicated that they experience gender discrimination in the workplace. The report does not include Jamaica or the wider Caribbean but is indicative of the global struggle of women in the sporting industry.

In Jamaica, we, too, must reflect on how we treat women and girls in sport. This includes the disparity in media coverage of girls and women in sports, the disparity in the sports department, and the number of women on boards of national sporting associations. Several persons might point to the increased number of women on these committees, but while that is good, the percentages are still low when compared to global standards for presidents and vice-presidents.

So, as we celebrate women’s achievements in the industry, I look forward to more direct policies being introduced that are geared towards empowering girls and women in sports.