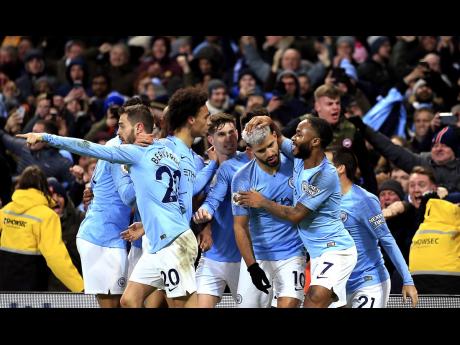 AP
Manchester City’s Sergio Aguero (second right) celebrates with teammates after scoring the opening goal of the game during their English Premier League match against Liverpool at the Etihad Stadium in Manchester, England, earlier this year.

The Premier League is investigating whether Manchester City broke any rules covering financial compliance, third-party ownership, and the recruitment of youngsters.

The announcement comes a day after UEFA opened a formal investigation into whether City tried to disguise the source of revenue from overvalued sponsorships.

The UEFA and Premier League cases have been sparked by leaked City correspondence published by German media outlet Der Spiegel.

The publication recently claimed that City made a payment to Jadon Sancho’s agent when the player was only 14 and before he left Watford in 2015. Sancho has since joined Borussia Dortmund from City.

Under Premier League rules, clubs are not permitted to offer financial inducements to a player under 16 or any person connected to that player.

The Premier League says it has “contacted Manchester City to request information regarding recent allegations and is in ­ongoing dialogue with the club”.

Without disclosing the ­specifics, the league pointed out that it “has detailed financial ­regulations and strong rules in the areas of ­academy player recruitment and third-party ownership. We are ­currently investigating these ­matters and will allow Manchester City every opportunity to explain the context and detail ­surrounding them”.