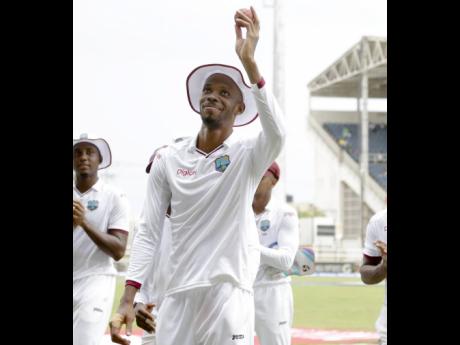 The Barbados Pride will be looking to ease to an outright win on today’s fourth and final day of their Regional Four-day Championship game against the Jamaica Scorpions at Sabina Park.

Needing 158 for an outright win, the Pride were five without loss at stumps yesterday. Openers Kraigg Brathwaite and Shane Moseley batted out the one over they had to face with no alarms.

Earlier on yesterday’s third day, the visitors stretched their first-innings total to 311 after resuming on 233 for five. They batted one short because Jomel Warrican had to pull out due to sickness. Jonathan Carter, who was 68 overnight, fell nine runs short of what would have been a splendid century, playing on to Akim Fraser. Wicketkeeper Tevyn Walcott, 16 overnight, went on to make 35 while Keon Harding made 23.

Faced with a 61-run first-innings deficit, the Scorpions openers, Kennar Lewis and Garth Garvey, found the early going rough. Lewis took 30 balls to get off the mark before skying an attempted hook off Harding and getting caught at midwicket for 11. Garth Garvey also started slowly before blossoming out and played some handsome shots before going leg before wicket to Harding for 37.

Brandon King looked dangerous in his quick knock of 44. He had hit Roston Chase for three huge sixes, but Chase had the last laugh as King was caught brilliantly on the boundary at midwicket as he attempted the fourth. Jermaine Blackwood looked promising but went for 31, bowled by Chase. Paul Palmer added 22 as the Scorpions were bowled out for 218. Roston Chase claimed five for 63 from 21.4 overs while Harding took four for 80. Scores in the game: Scorpions 250 and 218. The Barbados Pride 311 and five without loss