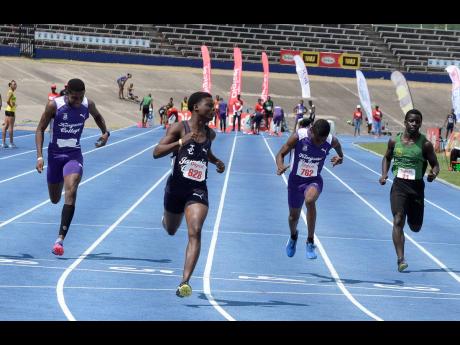 Both teams walked away with $250,000 each courtesy of title sponsor Digicel.

In the final meet of the Digicel Grand Prix series before the big finals next Saturday at G.C. Foster College, athletes produced some splendid performances.

There were three record runs in the boys 800m. Jamaica College’s J’Vaughn Blake led the way with his second record of the meet. Blake was in full control of his race from start to finish as he won the Class Two event with a new mark of 1:52.15 to erase the 1:52.92 Calabar’s Kimar Farquharson set two years ago. KC’s twin brothers, Giovanni (1:53.62) and Gianni Henry (1:54.00) took second and third, respectively.

Farquharson won the Class One 800m. He shrugged off some early pressure from JC’s Dugion Blackman then he showed his class in the latter stages to move away for an impressive win in 1:49.79 to break his one-year-old record of 1:52.51. Blackman was second in 1:50.49 while Farquharson’s teammate, Rivaldo Marshall, took third in 1:51.76.

In the Class One 400m hurdles, KC’s Romel Plummer was also in record-breaking mood. He won the event in 51.08 seconds to erase the 51.10 set by former Calabar athlete, Malik James King, last year.

KC took the first two places in the Class Two 400m hurdles where the top three finishers posted personal best times. Hayden Brown took the race in 52.77 ahead of teammate Rayon Campbell (52.98) with Tarrant High’s Jeremy Bembridge getting third in 53.21.

It was a great day for JC in the sprints as they won all four 200m for boys, but their biggest win came in the Class One 100m, where Michali Everett, competing against a negative wind of 3.9 metres per second (mps), turned back Calabar’s ace sprinter Michael Stephens. Everett won in 10.66 seconds with Stephens next in 10.84. Xavier Nairne of Wolmer’s was third in 10.87.

Scott led the JC sweep in the 200m after winning his second event of the day in a record 22.74. Mark Anthony Miller took Class Four in 23.33, De’Andre McIntosh captured the Class Two final in 21.93, and Ryeim Robertson was first home in Class One in 21.49.

Excelsior’s Ackera Nugent led the way among the girls with two records. Nugent first won the 400m hurdles in 59.80 then returned to stamp her class in the Class Two 100m hurdles. Despite running against a negative wind of 4.3 mps, she stopped the clock at 13.32 seconds to erase the old mark of 14.15.