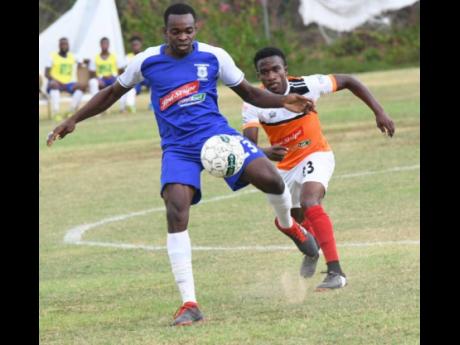 It was a result that left the Brazilian coach deeply disappointed, with his team now left with just three games to continue their fight against relegation.

As was the case in their last two home games, MBU found themselves trailing early on, with poor defensive organisation leading to a 17th-minute goal from Arnett’s Zhelano Barnes.

Both teams traded efforts, but it was the home team that got themselves on the scoresheet next, with hitman Dino Williams scoring an equaliser in the 64th minute of play. However, just when the home fans were starting to believe there would be another come-from-behind win for the men from the west, Jamiel Hardware broke their hearts with a strike with just nine minutes of play remaining on the clock.

Since taking over, Gama had led MBU to two draws and two wins prior to yesterday’s defeat, which stretched Arnett Gardens’ unbeaten run against their western rivals to eight games, with MBU’s last win against Arnett Gardens coming on March 5, 2017.

“It is [disappointing] because when you get a goal like we did and go through recovery, that gives us an opportunity to draw the game. We needed to have our heads,” said a clearly disappointed Gama. “I told them at the half we can win the game, we can draw, but also we can lose, so we must keep the organisation.”

“For some moment, I think we lose our heads and go for the all-out – everything or nothing. We had one point in our hands, but unfortunately, it was not a good day for us,” Gama added before underlining the importance of their upcoming games.

“We have nine points to play for now, so we have to keep on going,” he added.

Arnett Gardens head coach Jerome Waite praised his team for their approach and the determination they showed during the contest, their first win in their last three games.

“It was a spirited performance today [yesterday]. The goalkeeper kept them in the game right throughout, because we created a lot of chances, especially in the first half, that we should have put away. They also got their fair amount of chances, but in the end, we came back and scored that goal that made all the difference,” said Waite. “I think we needed it more than them today.”

The result sees MBU remaining in the relegation zone with 27 points and eleventh place, one place and four points ahead of last-placed Reno, who lost 3-0 to Dunbeholden yesterday. That result pushed Dunbeholden to 32 points, leapfrogging Humble Lion, who went down 1-0 to Harbour View, another team that moved further away from the relegation zone.