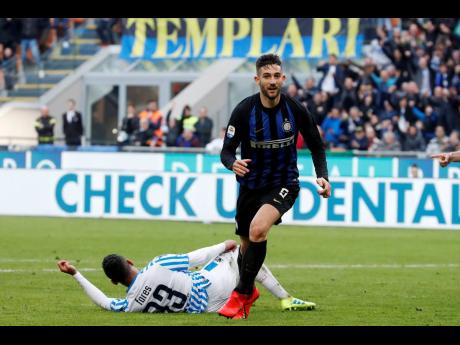 AP
Inter Milan’s Roberto Gagliardini celebrates after scoring his side’s second goal during the Serie A match between against Spal at the San Siro Stadium in Milan, Italy, yesterday. Inter won 2-0.

Inter Milan managed a confidence-boosting win ahead of next weekend’s derby against AC Milan, but their misfortunes continued yesterday in their Serie A contest against Spal.

Matteo Politano and Roberto Gagliardini scored in the second half to help Inter to a 2-0 win over relegation-threatened Spal.

Inter had earlier seen a goal ruled out on video review and penalty appeals waved away, while Marcelo Brozovic and Joao Miranda went off injured.

The Nerazzurri remained fourth, a point behind AC Milan. The top four from Serie A qualify for the Champions League next season.

Fifth-placed Roma are six points behind and host Empoli today.

Spal are two points above the relegation zone.

Inter were still without Mauro Icardi, who has not played since being stripped of his captaincy amid protracted contract negotiations. Icardi has said he has a knee injury.

Lautaro Martinez thought he had given Inter the lead after a half-hour, but the referee ruled it out for handball following a ­pitchside review.

Inter appealed for a penalty on the hour mark, but the referee opted not to review Kevin Bonifazi’s nudge on Antonio Candreva.

The hosts broke the deadlock in the 67th, as Lautaro’s pass was deflected to Politano, who smashed the ball into the back of the net. The goal again went to VAR, on suspicion of offside, but it was given after a lengthy delay.

Inter sealed the match 10 minutes later when Cedric’s shot turned into an assist for Gagliardini, who took a touch and fired it into the bottom-left corner.

Veteran forward Fabio Quagliarella is giving five-time World Player of the Year Cristiano Ronaldo a run for his money at the top of the goalscoring charts.

Quagliarella scored from a ­penalty kick in Sampdoria’s 2-1 defeat to Atalanta to take his tally to 20 for the season – a personal record for the 36-year-old Italian and one more than Ronaldo for Juventus and Milan forward Krzysztof Piatek.

Quagliarella’s penalty came either side of goals for Atalanta from Duvan Zapata, his 17th of the season, and Robin Gosens.

Atalanta moved seventh, level on points with Roma and Torino, with Sampdoria five points further back.