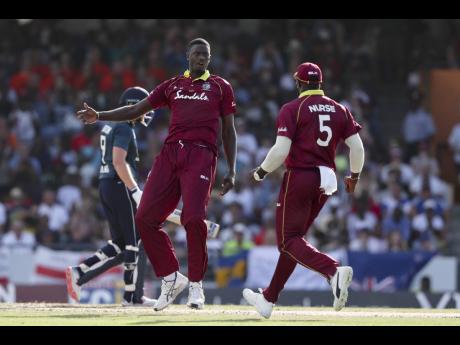 Captain Jason Holder says he is pleased with the development shown by the West Indies ahead of the World Cup, and hopes to use the Tri-Nations Series in Ireland to put the finishing touches on preparations for the showpiece.

Against all odds, the Windies twice came from behind to draw their five-match one-day series against world number one, England, producing several outstanding performances throughout.

West Indies will come together again in May for their next ODI series involving Ireland and Bangladesh, a period which Holder believes will be integral.

“If I look at our performances, we were pretty pleased with them, but we’re still down at [number nine] so we just need to improve on that,” the all-rounder said.

Overall, West Indies exceeded expectations against England, especially in the Test series, where they stunned the visitors by massive margins in the opening two matches to regain the Wisden Trophy with a Test to spare.

In the ODIs, the batting proved inspiring, with the hosts twice scoring in excess of 350. In the fourth match, they tallied a Windies record 389 in pursuit of 419 at the Grenada National Stadium.

West Indies have been given little chance at the World Cup, which runs from May 30 to July 14, but Holder remained upbeat about the side going forward.

“I’m pretty pleased as skipper, it’s just for us to keep building as a side,” he pointed out.