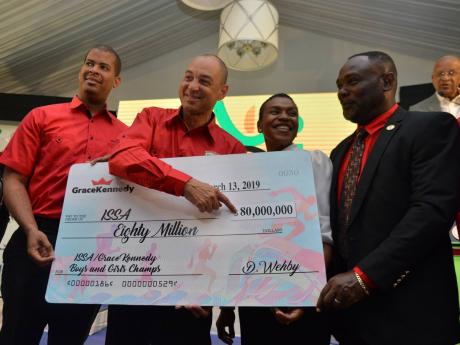 Don Wehby, chief executive officer of GraceKennedy, says that his organisation will be donating five defibrillators, which will be used at this month’s ISSA/GraceKennedy Boys and Girls’ Athletics Championships.

The highly anticipated championships, which is in its 109th staging this year, will be held at the National Stadium from March 26-30. A record 113 boys schools and 108 girls schools and over 3,000 athletes have registered to participate in the five-day championships.

Wehby, who is a past student of St George’s College, underlined the importance of the devices, which he says will play an important role in saving the lives of Jamaican athletes.

The executive pointed to the recent incident involving Jamaica’s 10,000m and 5,000m record holder Kemoy Campbell, who collapsed while competing at the Millrose Games in New York a month ago, and former St George’s College Manning Cup captain Dominic James, who passed away after collapsing during a schoolboy football match three years ago.

“I think it is extremely important because I will use the example of Dominic James and Kemoy Campbell, and there are other athletes in Jamaica that have had cardiac arrest while on the field,” said Wehby following yesterday’s media launch, which was held at the Spanish Court Hotel in Kingston.

“We believe at GraceKennedy that this is extremely important and so will be purchasing a minimum of five defibrillators, and we will work along with Team Jamaica Bickle because you know you are going to need training to use them,” Wehby said.

“I am also calling on the rest of the private sector to come and contribute so that we can get some more defibrillators. It is my hope and wish that all schools in Jamaica will have a defibrillator in their possession.”

Wehby also stated that his company would be pumping $120 million in this year’s championships, with $80million going towards the event itself and another $40million being used in the associated marketing campaign.

“Champs is always exciting because every year, I say that they can’t beat the number of records broken, but every year it happens, and so this goes to show that the standard keeps getting better and better.”

Colleen Montague, chairman of the organising committee, underlined the organisation’s zero tolerance approach towards guerilla marketing, noting that brands and businesses which infringe on intellectual property of the event will be prosecuted.

“When you participate in various forms of ambush marketing which seeks to associate a non-sponsor brand with the event, you threaten the structure that serves to lift our athletes, coaches, and schools to achieve all that they can be,” said Montague.

“Ambush marketing continues to be one of the biggest dangers to the survival of Champs, and we are prepared to defend it,” she added.

Montague announced that Caribbean Airlines is now the official air carrier for the championships.

Tickets for the event will go on sale on Tuesday, March 26.