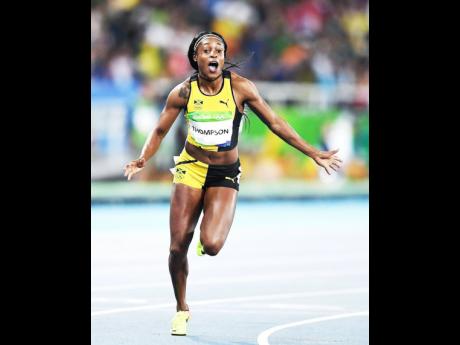 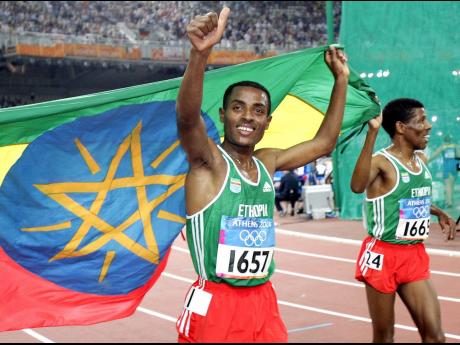 Thomas Kienzle
Gold medal winner Kenenisa Bekele of Ethiopia (left) celebrates with compatriot Haile Gebrselassie, who placed 5th, during a victory lap after the 10,000m at the 2004 Olympic Games on Friday, Aug. 20, 2004 in Athens, Greece.
1
2

It is September 25, 2000, and Paul Tergat of Kenya has hijacked the 10,000-metre final with a surprising early drive to the finish. Ethiopian hero Haile Gebrselassie shifts into high gear and edges closer to the tall Kenya on the final straight. With both straining for the line, Gebrselassie leans in and steals the gold medal.

It was a stunning climax to a contest with smart tactics, amazing athleticism, and Olympian determination.

There is a worry that exciting moments like that will become fewer if current trends continue. Until now, the Diamond League had the 3,000 metres in some of its meets and the 5,000 in others. Starting in 2019, the 5000m will be eliminated completely.

This follows the 2018 Athletics World Cup in London, which staged no race longer than the 3,000-metre steeplechase.

Even though Kemoy Campbell reached the World 5,000-metre final in 2017, Jamaican track and field fans won’t be bothered too much. After all, our track and field heritage is filled with sprinters. While Gebrselassie and the Kenyan track and field federation complain, we might well be whistling ‘one love’. There is, however, cause for concern. The Ethiopians and Kenyans win the bulk of their medals in the long-distance events, and if those events are eventually distended from the World Championships and the Olympics, their fortunes will dwindle.

In addition, those longer races made heroes of the Czech Emil Zatopek, Briton Mo Farah and Ethiopia’s baby-faced destroyer Tirunesh Dibaba and Kenenisa Bekele. All four are legends of the sport.

In the short term as Gebrselassie says, Diamond League fans will see fewer of the best runners now. In the long run, having trimmed the distance portfolio, the search for time-saving and sponsorship might pick off other disciplines.

Not long ago, it was banded about that the 200 metres, the 10,000 metres and the shot put were on the Olympic chopping block. If the 200m goes, something as elemental as the sprint double becomes a relic of the past. It sounds odd to us, but there are some who believe that the 200m is too similar to the 100m and the 400 metres. For those observers, it is surplus to requirements.

Jamaican sprinters have been brilliant in the 200. Donald Quarrie, Usain Bolt, Veronica Campbell-Brown and Elaine Thompson have all been Olympic champions in this beautiful event. Bolt, VCB and Shelly-Ann Fraser Pryce are all world champions. Lest we forget, Jamaica has two 200 metre world records. The men’s outdoor mark rests with Usain Bolt at 19.19 seconds, and Merlene Ottey has the women’s indoor standard, at 21.87 seconds.

In fact, the 200m is to us what the 5000m and 10,000m are to the Kenyans and Ethiopians. The only logical thing is to support the continued inclusion of the distance races in the international track and field programme and to help to find ways to make them presentable to the public and the potential sponsor. If those events disappear and the drive continues to make track and field fit in a smaller space, disciplines like the 200m, the triple jump and the shotputcould be next.

Like every sport, track and field needs sponsorship. To do that, it needs to hold the attention of wider audiences. To this end, much work is afoot to promote the generation of stars to step into Bolt’s big shoes. This deserves high commendation. Notwithstanding that, Gebrselassie’s hard-fought Olympic 10,000 metre win over Tergat was one of history’s best races. Moments like those illuminate sport and should be allowed to continue.