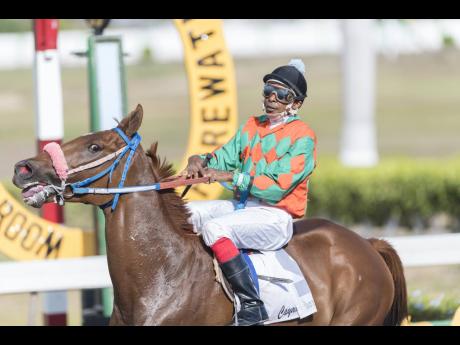 PAPA ALBERT has been showing good form in recent racedays and should give Sunrise-Six players the perfect start in tomorrow’s opening event of the Sunrise-Six.

The Sunrise-Six will comprise races two to seven, with the 800 metres opener attracting a crack field of $450,000 sprinters. FORTUNEONEHUNDRED, LADY JAELA, PRINCE SAMMO, and PAPA ALBERT are all very fast horses. The fastest is LADY JAELA, but there are question marks over her fitness. The Norman Smith-trained mare comfortably beat this claiming level last November but was declared a late-non starter when returning to the track on March 6. She has not been seen at exercise since then and will have to be bypassed.

PAPA ALBERT won at the lower level on March 2 after putting in a good effort at $400,000 claiming on February 16 and is the firm selection for the event. Top jockey Omar Walker remains on board, and punters can expect another big run from PAPA ALBERT, who is well drawn on the outside of the field.

Seven-year-old PIZARRO is another strong choice in the third over 1000 metres straight. He is down to the $250,000 claiming group after a promising run behind PAPA ALBERT on March 2. The Anthony Nunes-trained gelding has always performed very well at this level. He has won twice in the past seven months and gets the advantageous outside draw in the 12-horse field.

Native-bred five-year-olds and up will contest the third Super-Six event, Race Four on the programme. Main contenders are LET IT SNOW, RAY STAR, and INSTAGRAM. LET IT SNOW led for a long way over a similar distance on February 2 but was overhauled late by OKAHUMPKA and TRADITIONALMEDICIN. INSTAGRAM was fourth by just under six lengths to POWEROFGIVING, going 1200 metres on March 6, and is weighted to produce another top effort

The one they all have to beat, however, is RAY STAR, to be ridden by veteran jockey Shane Ellis. The five-year-old was slowly out but still ran a good race behind ADORING LADY on February 16. Earlier, he was behind TRADITIONALMEDICIN and LET IT SNOW but got into a great deal of trouble at the start of the 1000 metres round race. Given a clear run, RAY STAR will prove strongest in the final 200 metres of the race.

Trainer Charlton, however, appears to be favouring BALLON D’OR. Apprentice Kaiman McGregor, who rode FLOWERS THIRTY to victory, has been switched to the seven-year-old BALLON D’OR, and the hint should be taken.

Take SECRET LAW to win the sixth race and AXLE ROD to close all Sunrise-Six bets.