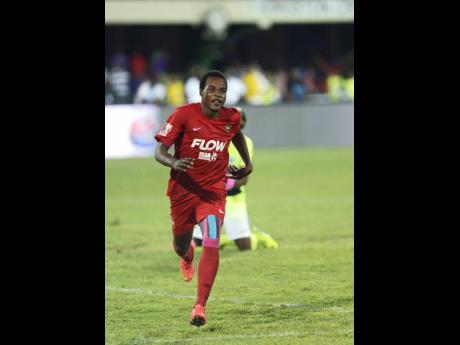 Mount Pleasant FA sealed Reno’s fate with a 3-2 victory over the hosts at Frome Sports Complex.

Renorio Downswell gave Reno the lead just four minutes into the game, but Jourdaine Fletcher’s 37th-minute strike ensured that both teams went to the break level at 1-1.

Kevaughn Isaacs put Mount Pleasant in front two minutes into the second half, but Javier Brown pulled Reno level in the 51st minute.

Just when the few Reno fans were starting to believe they could get something from the game Kesslon Hall netted for the St Ann-based team in the 79th to put the final nail in their coffin.

With two games to go in the preliminary round Reno are on 23 points in 12th place, seven below Montego Bay United.

Former player Linval ‘Pala’ Wilson Sr, who sat in on the sidelines yesterday, expressed his disappointment in seeing the club he holds dear to his heart relegated.

“It’s disheartening, knowing that the club has a rich tradition over the years, and to see it come to this is just sad. I think the Westmoreland people just need to go back and start the team afresh again,” Wilson, who is the coach of St Bess FC in St Elizabeth, said.

“I think the team has the ability to do much better,” Wilson added.

Cavalier took the lead in the 21st minute through a wonderful strike from Ajuma Johnson. However, second-half goals from Jorginho James in the 52nd minute and Rennico Clarke in the 84th minute sealed the victory for Harbour View.

Despite the defeat, Cavalier remain fourth in the standings on 50 points.

Defending champions Portmore United are still on top after their 0-0 draw against Waterhouse at the Spanish Town Prison Oval. Portmore lead the table with 60 points ahead of Waterhouse, 56, and Mount Pleasant 54.

Yesterday’s defeat was Cavalier’s second in the last four matches and technical director Rudolph Speid said his players must improve their game in their two remaining matches of the preliminary round if they hope to do well in the playoffs.

“It is definitely not good for us, but this could be a wake-up,” said Speid. “We are just not getting it right, and so we have to do some soul searching and see what are the reasons and just come again,” he said.

He added that his players played poorly in the second half, which resulted in their defeat to Harbour View.

“I really just don’t know how we played so badly because we went ahead, and we were in control of the game in the first half,” Speid said.

“I think we were taking Harbour View too lightly in the second half. They wanted it more, and we gave up two sloppy goals,” Speid noted.