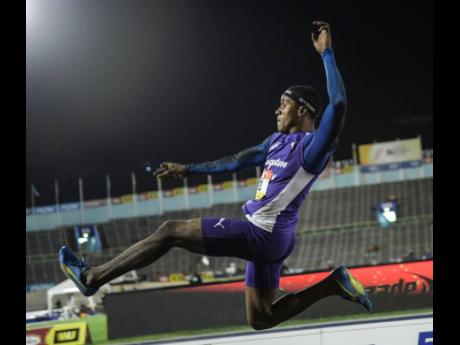 Competition will be fierce at the G.C. Foster College of Sports in Spanish Town today as the Digicel Grand Prix series will come to a climax with the staging of the G.C. Foster Classics starting at 8 a.m. There should be a lot of fireworks as high school teams will be battling for the top prize of $1 million while athletes will be seeking bragging rights with less than two weeks to go to the ISSA/GraceKennedy Boys and Girls’ Championships. After the conclusion of the various Championships, Corporate Area champions Kingston College (KC) will start favourites among the males to top their first Digicel Grand final after qualifying 23 individuals and two relay teams to today’s finals. On the other hand it should be a two-way battle between three-time champions Edwin Allen High and Hydel High for the girls’ crown. Ferry-based Hydel have the most qualifiers among the girls with 17 individuals and two relays while the defending champions, Edwin Allen will have 15 athletes in individual races and two relay teams. Events in the Grand Prix finals will begin at 5 p.m., with the 400m hurdles Open for girls and will end at 8 p.m., with the high school boys 4x400m Open.

This year’s staging is expected to be the most competitive ever, especially among the boys, where defending Grand Prix champions Calabar are facing a red-hot KC team. KC are expected to start the meet with a bang as Romel Plummer, the top runner in the Class One 400m hurdles this season, will be hoping to continue his great form after two sub -53 seconds and a sub-52 at Corporate Area Championships, where he produced a record run and personal best of 51.08 seconds.

An epic battle is expected in Class One 800 metres as the in-form Kimar Farquharson, following his record run of 1:49.79 a week ago, should be challenged once again by JC’s Dugion Blackman, with the Central Championships winner, Tyrice Taylor of Enid Bennett High, and Western Championships winner Tyrese Reid expected to make big runs here.

In what is expected to be one of the hottest clashes among Class Two boys, KC’s Terrique Stennett will face off with St Jago’s Vashuan Vascianne in the 100m.

Both have shown excellent form and this event is expected to be a cracker as the winner here will definitely go to Boys’ Champs as the favourite.

Bellefield High’s Class Three middle distance ace, Tavaughn Martin, will get his biggest test to date after his impressive 1:57.48 800m win at Central Championships. He will face several Class Two athletes including the KC duo of twin brothers Giovanni and Gianna Henry and the outstanding J’Voughnn Blake of JC, the double record holder at the Corporate Area Championships in the 800 and 1500m. In field events, Kingston College’s Wayne Pinnock will be hoping for a legal eight metres jump as he has gone over that mark twice so far this season but on both occasions they were wind-aided. Hydel girls look set to dethrone defending champions Edwin Allen and their charge will be led by Class One high jumper Lamara Distin, who will have Edwin Allen’s Janique Burgher to contend with. Distin, who has gone consistently over 1.80m all season, gets the edge.