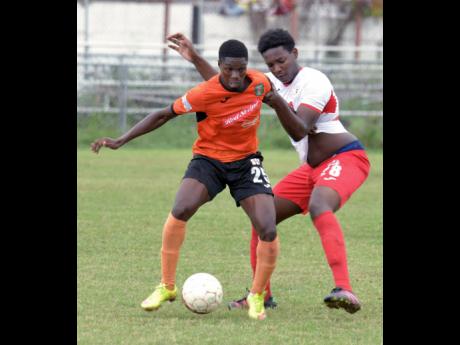 Tivoli Gardens striker Colorado Murray says that he will be pushing himself to the limit, in an effort to capture this year’s Golden Boot award for the leading scorer in the Red Stripe Premier League competition.

Murray, who is a former Excelsior High School Manning Cup standout, leads the goalscoring chart with 12 goals, one ahead of Arnett Gardens’ Fabian Reid.

Portmore United’s Javon East and Waterhouse’s Tremaine Stewart are both tied for third spot on 10 goals each.

Murray, who was converted from a midfielder role to a striker by former Tivoli Gardens coach Omar Edwards at the start of the season, said that he is very determined to win the award this season.

“I am feeling good to be the leading goal scorer in the Premier League, and with two games left, I need to score more goals and leave the other players behind, and so I am prepared to do that now,” said Murray.

“Winning the Golden Boot will mean a lot for me, knowing that I am a midfielder and I was converted into a forward, and so I just have to give credit to my former coach, Omar Edwards, for helping me along this line,” Murray said.

Tivoli Gardens have been struggling this season, and they are now in seventh place on 39 points, four behind sixth-place UWI in the race for the final top-six spot in the playoffs.

Murray added that he is very disappointed that they have found themselves in this position, but he would be doing his best to ensure that they win their final two games and had hoped that UWI drop points.

“I am not feeling good because my team is in seventh place, and we need to make it into the play-offs and we are four points off the top six and so we need points, and there are six points up for grabs in the last two games,” he said.

“We have to depend on UWI losing their games, which we didn’t want to do at this point of the season. I just need to go out there and score some goals and help my team win and just hope for the best,” Murray stated.