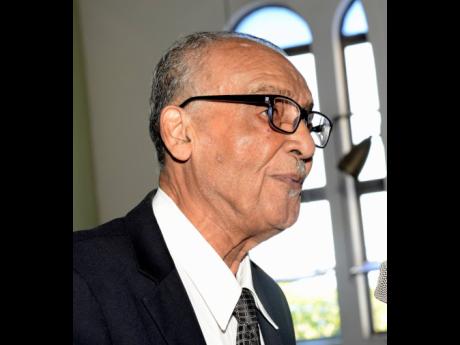 Pastor Ralston Getfield, a childhood friend of Tony Becca’s, described him as a very devoted family man and someone who always tried to be the best at whatever he did.

Getfield was among hundreds of mourners who gathered at the St Matthew’s Anglican Church in Allman Town yesterday to pay their final respects to Becca, who died on February 28 at the Andrews Memorial Hospital in St Andrew. He was 78.

“The shoe he has left behind is one of dedication and one of sacrifice,” Getfield said while giving the remembrance.

“Tony’s life was certainly a blessing to everyone. It is not how long a person lives, but it is the quality of life that they live, and Tony lived a good life,” Getfield, who knew Becca for more than 70 years, said.

Alva Anderson, president of Kingston Cricket Club and a long-time friend, also paid tribute to Becca during the service.

“I have known Tony since 1963, and he was my brother, and I have every respect for him,” said Anderson.

“He was a friend of my family, and he was excellent in terms of his writing skills, his understanding of the game, and his willingness to listen to the opinions of others and take them into consideration,” he said.

Born November 10, 1940, Becca was Jamaica’s best-known cricket writer. He covered more than 150 Test matches all over the world.

“He was someone that was always behind me. He was someone that I respected quite a bit, and like I said, in my tribute to him, we had our moments when we did not see eye to eye, but I thought he was very fair and respectful and reported it (the news) as he saw it, and so he will surely be missed,” Cameron said.

Also at the funeral was former West Indies wicketkeeper-batsman Jeffery Dujon, who said Becca would be missed by all.

“I have known Tony Becca since I was a little kid at Wolmer’s Boys, and he is somebody who I had a lot of respect for as a journalist and as a person,” said Dujon.

“He was somebody I really enjoyed talking to. He was a very fair journalist in terms of cricket, and even if we disagreed, he was somebody I could talk to, and you always felt that he still respected you, and so he is going to be sadly missed,” he said.