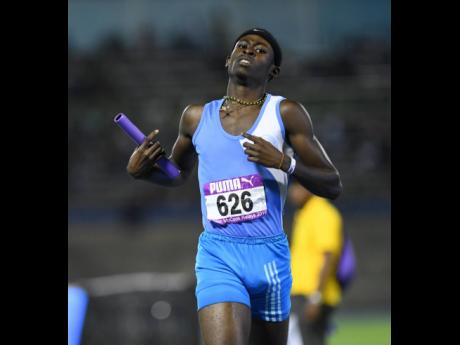 Enid Bennett High’s Tyrese Taylor was in spanking form in the Class One 800 metres at the Digicel Grand Prix finals at GC Foster College in Spanish Town yesterday.

Taylor stopped the clock at 1:48.85 just one hundredth of a second outside the Boys’ Championship record of 1:48.84 set by former Vere Technical star Sherwin Burgess in 1987.

Following his spectacular performance on the anchor leg for his team in winning the sprint medley at the Gibson McCook Relays, Taylor hit top form again yesterday. Favourite for the event, Calabar High’s Kimar Farquharson, was taken out of his comfort zone very early and failed to finish the event. Tyrese Reid of Spot Valley High was second in 1:49.30 and Dugion Blackman of Jamaica College third in 1:52.25.

Kingston College made a good start at the meet as they swept both 400m hurdles. In Class Two, Jaden Brown won in 53.61 seconds while in Class One the in-form Romel Plummer crossed the line first in 51.62 seconds.

Oneika McAnuff of Hydel High also ran very well as she captured the Under-17 girls 400m in a record 53.12 from Holmwood Technical’s Rickiann Russell (53.46) and .Dejana Oakley of Clarendon, who was third in 54.83.