Walker on top in jockeys’ race 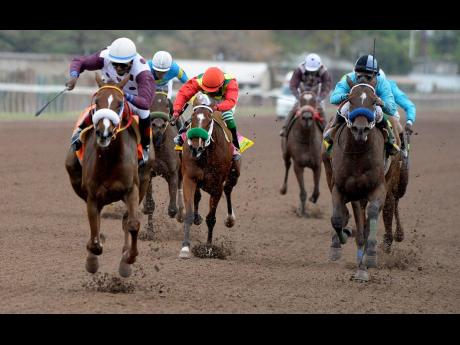 Lionel Rookwood
LADY BLUE (left), with Omar Walker aboard, wins the 28th running of the Thornbird Stakes over 1400 metres at Caymanas Park yesterday.

Six-time champion jockey Omar Walker surged to the top of the jockeys’ standings yesterday with a three-timer, including an enterprising ride aboard Wayne DaCosta’s LADY BLUE in the Thornbird Stakes, turning the tables on Anthony Nunes’ 4-5 favourite, CORAZON, who finished fourth in the seven-furlong fillies’ Guineas prep.

Nunes’ TOONA CILIATA later won the Prince Consort Stakes with Shane Ellis, upstaging stablemate EARN YOUR STRIPES by disputing the lead and outstaying FATHER PATRICK, who Walker tried his best to preserve down the backstretch.

Coming off the turn full of running, FATHER PATRICK looked in control but failed to stay the trip and surrendered the lead to a rallying TOONA CILIATA a half-furlong out yet still finished a length ahead of 2-5 favourite EARN YOUR STRIPES, a length and a half behind the winner’s final time of 1:25.4

In the Thornbird Stakes, champion trainer DaCosta again flipped the script on Nunes, using LADY BLUE to turn the tables on her three-time conqueror, CORAZON.

Similar to RUN THATCHER RUN in last year’s Jamaica Two-Year-Old Stakes, the defining race of the trainers’ championship, which DaCosta retained for the 13th consecutive year, the champion trainer presented a vastly improved LADY BLUE to turn the fillies’ Guineas on its head a month out.

Walker put LADY BLUE on the lead early, staving off challenges from PRINCESS LAUREN and Nunes’ PRINCESS AVA, while CORAZON lurked not too far away in fourth place.

Despite improving into second, coming off the home turn, CORAZON had no answer when Walker kicked on 8-5 chance LADY BLUE, after taking a quick glance over his right shoulder at Robert Halledeen aboard Nunes’ struggling runner.

LADY BLUE stayed on well to beat 12-1 outsider, PRINCESS AVA, by two and a quarter lengths, establishing herself as the 1000 Guineas favourite, clocking a final time of 1:26.0.

Walker won the following event astride Peter McMaster’s 3-5 favourite, RAS EMANUEL, at five furlongs round, piloting the whip-shy seven-year-old horse home under a hand ride, beating pesky MY SISTER by a head in a stretch duel, moving to 18 winners after earlier landing the second event with PAPA ALBERT.

DaCosta and Welsh Soutar each saddled two winners. DaCosta opened the 12-race programme with 3-2 chance YAYA’S DREAM before Soutar landed the next two events with PAPA ALBERT and JASON’S GOLD.