King’s ton not enough as Scorpions lose to Red Force 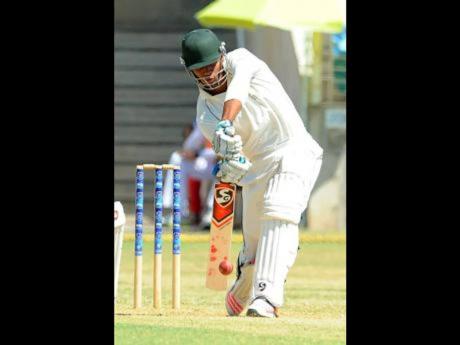 Brandon King blasted an aggressive century, but it wasn’t enough to stop the Jamaica Scorpions from going down to the Trinidad and Tobago Red Force by 85 runs in their final match of the Regional Four-Day Championship.

Set an unlikely target of 337 runs for victory after the home side was dismissed for 295 early in the morning session, the Scorpions were bowled out for 252, with King’s 133 being the only real form of resistance.

Apart from his knock, only one other batsman scored more than 20, as spinner Imran Khan and medium pacer Odean Smith each took three wickets to restrict the visitors.

Fast bowler Shannon Gabriel struck first when he had Garth Garvey caught by Kyle Hope for eight with the score on 23.

Anderson Phillip then trapped John Campbell lbw for 25, and three balls later, he dismissed Jermaine Blackwood for a duck as the Scorpions slipped to 52 for three.

Assad Fudadin only lasted four balls before he, too, was bowled for a duck by Smith.

With the Scorpions in trouble at 67 for four, King and Paul Palmer came together in a fifth-wicket partnership that yielded 75 runs.

So dominant was King that Palmer only contributed 18 runs during that stand.

But just when it seemed the Scorpions would stage a fightback, Smith struck again, having Palmer caught by Joshua Da Silva.

King kept on battling, though, and was extremely aggressive throughout his 119-ball innings.

During that time, he struck 14 boundaries and four sixes as wickets continuously fell around him.

By the time Khan accounted for his wicket to leave the Scorpions’ 218 for seven, the result was already on the cards.

Khan wrapped up the match by dismissing Akim Frazier and Nicholson Gordon, while another spinner in Khary Pierre snagged the wicket of Kennar Lewis.

Earlier, Jason Mohammed’s unbeaten 110 was the backbone of the Red Force’s second-innings total of 295 all out.