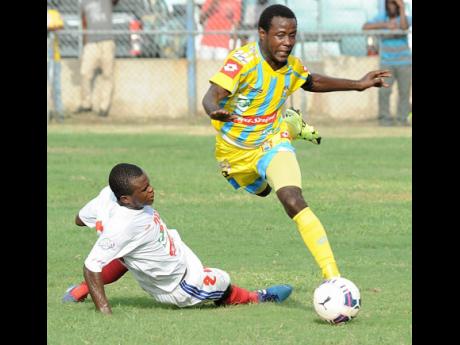 Ian Allen
Damarley Samuels (right) from Waterhouse is about to be taken down with a hard sliding tackle from Kemar Phillipott from Portmore United during a Red Stripe Premier League match at the Waterhouse Stadium in 2015.

The physical nature of the Red Stripe Premier League (RSPL) has once again come under criticism from Reggae Boyz team manager Roy Simpson, who believes that local referees encourage the overly aggressive culture by not enforcing some rules of the sport.

Simpson also believes that the Jamaica Football Federation (JFF) should do more to monitor the standards of the league and pay greater attention to ensuring that the what described as a “savage” style of play is stamped out.

“The way we play (locally), we play to hurt each other. A league like ours, when you do comparisons, we have more red and yellow cards than, for example, the English Premier League. The (local) players are hitting players with their hands in their faces. The tackles show they don’t care for the well-being and health of their opponent, and at the end of the day, you want your health to be protected,” Simpson said.

“The last time, coach Whitmore met with the respective coaches of the clubs and spoke about that. We consistently speak to players who we call to camp. We also try to speak to the referee assessors and the referee instructors about this. I am not saying the referees are doing good or bad games; I am just saying that referees help to foster the kind of vicious culture we have in the league, because when they (players) behave or play like that, they (referees) don’t expel the players from the game,” Simpson said.

Simpson says that too often, players turn up to national training camps and for international friendlies lacking the knowledge required to play at the international level.

“The JFF is a big part of it, too, because we are not monitoring it and not paying enough attention to how the players operate. We need to get into the clubs and share what we do at the national level so the players come to us prepared and we can apply the finishing touches for them to be able to play at the international level.

“But if players in the league consistently behave and play like that, when they get to the international level, because of the way they play and how they are cultured in the league here, they are not really going to serve us,” said Simpson.

“You put them in tournaments, and by the time they go on the pitch, they use their hands to slap another player in the face, and when they do that at the international level, that’s a red card. The international game is played with a certain intensity. However, the physicality of international football is not to hurt an opponent. I don’t say it doesn’t happen, but it is not consistent, and it is not the norm at that level. But it is the norm at our level, and it pulls away from the efficiency of our players and the operation of the league,” he argued.

He added that the JFF will have to continue to encourage stakeholders to understand that they are investing in players and that it benefits all concerned parties to restrict the aggressive football being played in the league.

“We will have players prepared and better ready to serve at the international level. We will have less injured players. So we will have healthier players, a more efficient league, and players will be packaged better for export,” Simpson said.