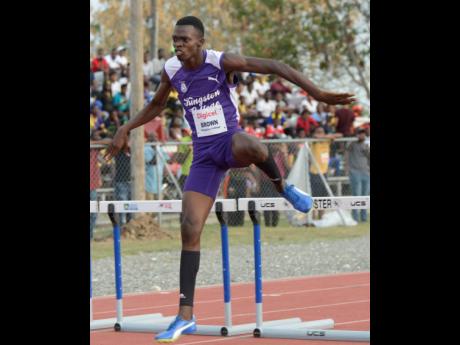 Ian Allen
Jayden Brown of Kingston College, clears the final hurdle ahead of the field to win the class two boys 400 metres hurdles during the Digicel Grand Prix final, which was held at G.C. Foster College on Saturday.

It has been a season of record-breaking performances, and the trend continued last Saturday at the G.C. Foster College of Physical Education and Sports as athletes warmed up for next week’s ISSA/GraceKennedy Boys and Girls’ Athletics Championships at the finals of the Digicel Grand Prix, where new champions were crowned.

Hydel and Kingston College (KC) walked away with $1 million each for being the top overall female and male teams, respectively, each securing their first hold on the titles, as three-time champions Edwin Allen and Calabar were forced to settle for the runner-up spots.

Hydel tallied 123 points and were followed by national girls’ champions Edwin Allen, 94; Holmwood, 85; and St Jago High, 51, with St Mary’s High, the most improved team at the meet, closing out the top five with 37.5 points.

The finals started off on a bad note for both defending champions, as Edwin Allen’s Lashanna Graham, the event favourite, and Calabar’s Anthony Danvers, the second-fastest schoolboy so far this season, both fell in the 400m hurdles event at the last obstacle and jogged in last for just one point each. For the remainder of the meet, the trend continued for both teams, as the likes of Edwin Allen’s Rushana Dwyer and Calabar’s Kimar Farquharson, who were favourites to win the 800 metres in their respective classes, both failed to finish their events.

In fact, the star performance of the day came in the boys’ Class One 800 metres, where Enid Bennett’s Tyrice Taylor, a first-year athlete in the class, covered the first 400 metres in 53.32 seconds, with Farquharson finding the early going too hot to handle. Taylor maintained his pace to finish in an amazing 1:48.85 seconds, just shy of the Champs record of 1:48.84.

An epic battle was expected in the boys‘ Class Two 100 metres between St Jago’s Vashuan Vascianna and Kingston College’s Terrique Stennett. In the end, Stennett, who got a blazing start, made it anticlimactic as he sprinted from his rival and even had time to slow down a few metres from the finish line to win in a season-best 10.48 seconds. Vascianna had to settle for second in 10.54 seconds, with Stennett’s teammate, Nkrumie Bouwahjgie, finishing third in a decent 10.71 seconds.

After seeing his teammate, Conroy Jones, clocking 10.45 seconds earlier in the day in a non-Grand Prix event, St Elizabeth Technical’s Dashinelle Dyer, more known for his 400m hurdles abilities, showed the quality of his school’s sprinting programme as he surprised a strong field in the Class One 100m to win in 10.40 seconds. Dyer got the better of Calabar’s Michael Stephens, 10.45 seconds, and Kishane Thompson of Garvey Maceo, 10.47 seconds, with pre-race favourite, Michali Everett of Jamaica College, fourth in 10.50 seconds.

Competing with the senior girls, Edwin Allen’s Kevona Davis went sub-23 seconds after a dominant first half of the race in the 200m, stopping the clock at a record 22.82 seconds. Hydel’s Ashanti Moore, who ran on strongly in the end, finished second in a decent 23.10 seconds, with Daszay Freeman taking third in 23.62 seconds.

Davis’ teammate, Tina Clayton, was also in record form as she once again got the better of St Jago’s Brianna Lyston, who was second in 23.83 seconds. Rusea’s Crystal Chambers was third in 24.25 seconds.

Twin sister of Tina, Tia, was unfortunate in the girls’ Class Two 100 metres, as she was denied of the record by headwind of +2.1 metres per second wind, after clocking a fast 11.32 seconds to win the event and in the process turn back the Hydel duo of Alana Reid, 11.59, and Kerrica Hill, 11.71.