Paul Wright | The culture of exclusion 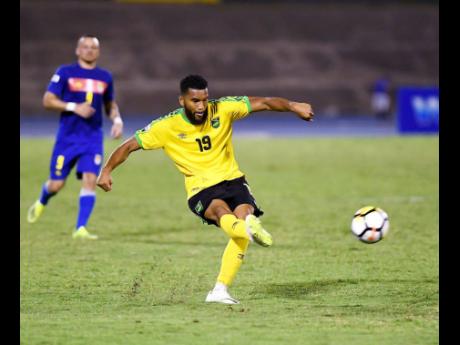 Ricardo Makyn
Jamaica’s Adrian Mariappa in action against The Cayman Islands in their CONCACAF Nation’s League game at the National Stadium on Sunday, September 9, 2018. Mariappa is one of many English-based players to represent the Reggae Boyz team in recent years.

I, and, indeed, Jamaica, owe a debt of gratitude to Livingston Scott for the interview of Jamaica senior men’s football team manager Roy Simpson, published in The Sunday Gleaner two days ago. In the interview, Simpson said that a number of players in the much-watched and loved English Premier League (EPL) “have, in the past, expressed an interest in donning the Jamaican colours but have failed to complete the process of eligibility”.

Simpson goes on to assert that most of these players want to come and play in an international friendly, not necessarily to be capped, but to “see what the set-up is like”. At last! The facts! Now we can understand what is really behind the ‘iffing’ and butting surrounding the “promise” of English-born players of Jamaican descent to play for the land of Reggae, Rastafari, and Usain Bolt. The nation is incredibly grateful to the late president of the Jamaica Football Federation, Captain Horace Burrell, Coach René Simoes, and the English-born players of Jamaican descent who combined to carry us to the FIFA World Cup Finals in 1998 and the defeat of Japan in the preliminary stage of the competition.

This historic first, unfortunately, was to stymie the development of our football because for the rest of the tenure of the late president, the same formula that was used to get us to the World Cup was utilised year after year, failure after failure. It was not until the coming of Theodore ‘Tappa’ Whitmore and his determination to utilise local talent in his relentless drive to develop our football that the hierarchy of our local football realised what the current manager is now articulating. If Tappa had not threatened resignation in early 2018, and if the nation had not stood steadfast with him, the disastrous and failed formula of trips to Europe would have continued ad nauseam.

I do believe that there have been good English-born players of Jamaican descent who may have genuinely, deep down, wanted to represent us in international football, and to assist in the development of football locally, but as yet, I am unable to name them. That does not mean that they do not exist. But when your talent and skill are just not good enough to make the national team of the country in which you were born, and your future as a professional may be tied to international caps, it is easy to see why there can be a rush to make the initial contact.

The recent case study of Leon Bailey fortifies my point. In the beginning, there was talk from his management team of representing England through the “grandfather” route. It is only when it was categorically shown that there was NEVER going to be any chance of representing England (unless through naturalisation after residing there for five years) that the possibility of representing us looked like a distinct possibility. The demand of Bailey and his management team to insist on the inclusion of his brother, Kyle Butler, (without a trial) and the steely backbone of the manager of the Reggae Boyz has now put that possibility to rest. So now, if Simpson and Whitmore are allowed to continue their quest, and the Honourable Minister of Sports Olivia Grange continues to seek international matches for the Boyz ( á la the proposed Carib African Cup), we may yet see a return to World Cup football.

There is nothing wrong with the natural skill and ability of our local athletes to excel on the world stage. All that is needed is the opportunity. In cricket, the Windies boast some of the best players in the world. Just look at the demand for their skill worldwide. If we can stop alienating them and nurture the deep love that these players have for the sport and their country, we can return to the glory days of dominance in world cricket. That can only come if there is a culture of inclusion instead of exclusion. We have had years of exclusion. In the next few days, those who decide who will lead Cricket West Indies, for at least the next two years, will vote on the capabilities of the two men vying for the presidency. All I, and the majority of the fans of West Indies cricket, ask is “give the players a chance”. Try another way. Give Ricky Skerritt a chance.