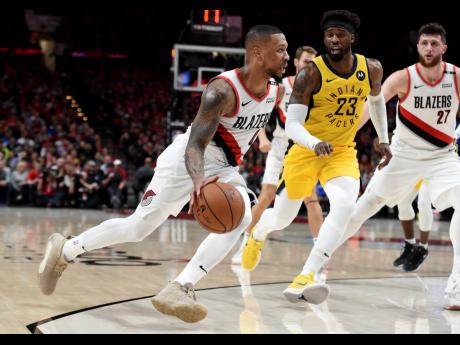 AP
Portland Trail Blazers guard Damian Lillard (left) drives to the basket on Indiana Pacers guard Wesley Matthews during the second half of an NBA basketball game in Portland on Monday night. The Blazers won 106-98.

Damian Lillard plans to take a bit more control over games in the absence of backcourt mate CJ McCollum.

Lillard had 30 points and 15 assists as the Portland Trail Blazers beat the Indiana Pacers 106-98 on Monday night in their first game since McCollum injured his left knee.

“I guess being a little more hands-on and managing what’s going on out there, just knowing that a guy who averages 22 points isn’t on the floor,” Lillard said of his adjustment. “It doesn’t mean I have to score more points, or dominate the ball, but just making sure that I’ve got control over what’s happening out there a little bit more.”

Jusuf Nurkic added 18 points and 11 rebounds for the Blazers, who led by as many as 21. Portland has won four of five and is holding on to fourth place in the Western Conference.

Myles Turner had a season-high 28 points and 10 rebounds for the Pacers, who missed out on clinching a play-off spot in the East. Indiana (44-27) have lost six straight on the road.

Bojan Bogdanovic’s layup pulled the Pacers to 100-91 with just under three minutes left, and Turner made free throws to get Indiana closer. The teams traded free throws down the stretch, but Portland was stung when Nurkic fouled out.

Wesley Matthews’ layup closed the gap to 102-97, but Al-Farouq Aminu made free throws on the other end and Portland held on.

McCollum, averaging 21.3 points per game this season, got hurt during Saturday’s loss at San Antonio. He has a popliteus strain and will be re-examined in a week, the team said. It isn’t known whether he’ll be back before the end of the regular season.

Turner scored 11 points in the opening six minutes and the Pacers led 19-12. They stretched the margin to 11, but Portland got to 31-28 by the end of the first quarter.

Lillard closed out the first half with a 3-pointer from close to the pinwheel logo at centre court, and the Blazers went to the locker room with a 55-48 lead. Lillard had 18 points and eight assists in the half. Turner also scored 18 to go with six rebounds.