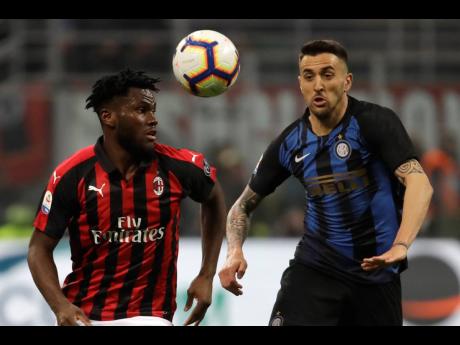 Inter Milan have been handed a suspended sentence of having one of their stands closed for a match after their fans were again found guilty of racist chanting.

The Italian league said in a statement that “a significant per cent” of supporters in the stand in question were heard racially abusing black AC Milan midfielder Franck Kessie during Sunday’s derby victory in the seventh and 39th minutes of the first half.

The sentence will be suspended for a year but will be added on to any additional punishment if Inter’s fans commit more racist abuse during that period.

It is the second time this season that Inter has been sanctioned for racial abuse.

Schreuder to return to Hoffenheim

Hoffenheim is bringing Alfred Schreuder back from Ajax to take over as coach from the departing Julian Nagelsmann.

The Bundesliga side says Schreuder, who worked as Nagelsmann’s assistant before departing for a similar role at Ajax in January, will return from July 1 after signing a deal through June 2022.

Nagelsmann, who saved Hoffenheim from relegation in 2016 and led the side to Europa League and Champions League qualification in the next seasons, had already agreed last summer to take over Bundesliga rival Leipzig for next season.

Paris Saint-Germain won an initial legal battle with UEFA yesterday over the monitoring of their spending on player transfers and wages and sponsorship deals linked to the club’s Qatari owner.

The Court of Arbitration for Sport upheld PSG’s appeal against an attempt by UEFA investigators to reopen a previously closed investigation.

The judgement in favour of PSG is separate from another UEFA investigation of its finances in the 2017-18 season, when the French champions, backed by Qatari sovereign wealth, signed Neymar and Kylian Mbappe.

The most severe punishment in that ongoing probe could see UEFA ban PSG from the Champions League. World football’s most coveted club competition is key to building the club’s global appeal and paid the French club €62 million (US$70 million) last season in prize money alone.