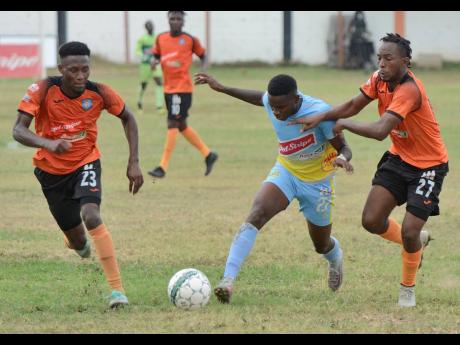 Waterhouse FC’s assistant coach, Daniel Bent, says it would be difficult to accept if they blundered in their final regular-season game against Montego Bay at Drewsland Stadium this afternoon and lost second spot to Mount Pleasant FC in the Red Stripe Premier League (RSPL).

Mount Pleasant go into the round on 57 points, two less than Waterhouse. The St Ann-based Mount Pleasant have the more difficult assignment, as they visit fifth-placed UWI FC, while Waterhouse will host Montego Bay United, who are in 11th spot and need a miracle to avoid relegation.

Portmore wrapped up the regular-season title and captured the $1-million prize after climbing to 63 points, four more than Waterhouse. But despite missing out on the million dollars, Bent admitted that it would be a big disappointment if they lost out on second place after holding that position in the table for so long.

“It being (second) has to be important. We have maintained our dominance throughout the season, and to come here and lose second, it would be not be a good thing. You can’t be in the ascendency and the second spot for so long, and at the end of the day, you end up in the quarter-final play-offs,” he said

“It’s going to be another tough match because Montego Bay United will be seeking three points. They are not totally out of it, and we have to keep as close to Portmore as possible, and Mount Pleasant are right on our heels, so we are on the hunt. We know Waterhouse and Montego Bay [have] always been great rivals as we both have players who have represented the two clubs.

“So it is going to be a very sentimental game but we should take the three points all things being equal, and if we show the same type of boldness in front of goal like we did against Tivoli. The guys are upbeat, and they knew what they did right against Tivoli, and they knew what they did wrong. But three points is what we are hoping for, and three points should be attained at the end of 90 minutes. It’s all down to the players executing on the day, but we should be alright,” he added. Waterhouse defeated Tivoli 4-2 in an away match on Sunday.

The top three in the league are followed by Cavalier (51 points), UWI (46), and Arnett Gardens (45) to round off the top six qualifiers. Reno have been relegated from the league, while Montego Bay are the most likely candidates to follow suit, as they are three points behind Dunbeholden, who have a far superior goal difference.