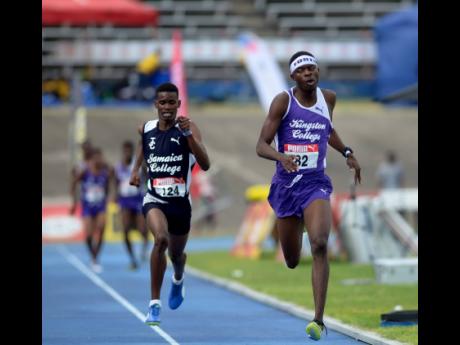 Shorn Hector
Tarees Rhoden of Kingston College (right) holds on to finish just ahead of Jamaica College athlete J’Voughnn Blake in the Boys Class One 1500m at the Youngster Goldsmith meet held at the National Stadium on February 2, 2018.

FORMER champions Kingston College are making a big push to unseat defending champions Calabar at next week’s ISSA/GraceKennedy Boys and Girls’ Athletics Championships, and one of the reasons behind their great season so far is the inspiration of their captain, Tarees Rhoden.

Rhoden is desperate to end his Championships career on a winning note by the the North Street-based school to their first hold on the Mortimer Geddes trophy since 2009.

Rhoden’s leadership has been key to the school’s push this season, with the youngster seen at various meets motivating and encouraging his teammates.

The skipper clearly understands his role and his hoping that his own improvements and successes this season can serve as a platform on which a Champs title run is built.

“I was selected as a captain for the team at the start of the season and since then, I have been motivating them both physically and mentally, telling them that it is not only a mind game, but also a physical one because all of who they are competing against are humans like themselves, so I just keep on motivating them each and every day,” said Rhoden.

“I have been having a great performance so far, a very steady one, and it has been better than last year at this point,” said the 800m man.

After watching Enid Bennett High’s Tyrese Taylor clock a fast 1:48.85 to win at G.C. Foster Classic last Saturday, Rhoden said that he was not bothered by the competition in what is easily one of the most anticipated events at Champs, promising that fans will see his best when it really matters.

“After seeing my main competitors running fast so far, I know I am also in great shape. I am the only one who is yet to compete in a quality 800 metres race, but at ‘Champs’ you will see,” Rhoden continued.

Rhoden, who was third in the 2000m Steeplechase last year and a disappointing eighth in the two-lap event, is certain of his 800m commitments but is yet to decide with his coaches on his second event.

“I definitely will be competing in the 800 metres, but at this moment, I am not sure if it will be the Steeplechase or the 1500m as well although I am positive I can improve my third- place finish in the steeplechase.”

Kingston College is seen in some quarters to be the favourites heading into Champs, but the youngster is not getting carried away and knows the work must be done over the five days of the championships to lift the trophy next Saturday at the National Stadium.

“In previous years, we have been favourites and it is what happen on the days of Champs (that matters), and this time we are taking it day by day. It is going to be a cracker this year, and we are confident that we can win the title,” said Rhoden.

“Winning the Manning Cup title has really helped to motivate us, also the Schools’ Challenge Quiz team’s performances so far and we are hoping to take all three titles,” Rhoden concluded.