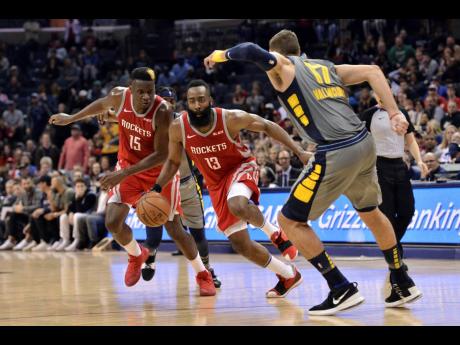 James Harden did everything he could to bring the Houston Rockets back from a big deficit in the fourth quarter. He got them to overtime, but his 57 points weren’t enough.

All because of a last-second free throw.

Mike Conley scored 35 points and Jonas Valanciunas had a career-best 33, including the game-winning free throw with less than a second left, as the Memphis Grizzlies outlasted the Houston Rockets 126-125 on Wednesday night.

Harden led a 17-2 Houston rally in the fourth – scoring 15 points during that stretch – to pull the Rockets to 106-104. He hit three free throws with four seconds remaining to send the game to overtime tied at 115.

Harden scored all 10 points for Houston in overtime, and the teams were still tied at 125 when Clint Capela fouled Valanciunas with 0.1 seconds left. Valanciunas, who also had 15 rebounds, made the first of two free throws. The clock ran out after he missed the second foul shot. Chris Paul had 18 points and seven assists for Houston, which had won three straight. Capela added 14 points and 10 rebounds. The loss was only Houston’s second in the last 14 games.

“It was one of those games. Every once in a while it crops up,” Rockets coach Mike D’Antoni said ,“You’ve got to go on. It’s too bad, but we just kind of threw that away.”