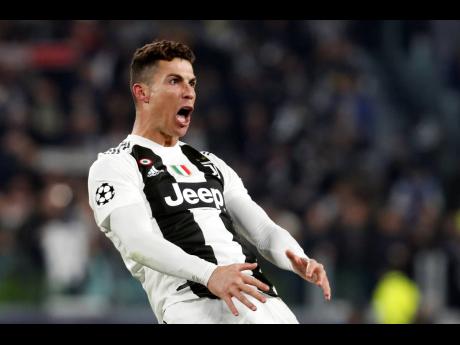 NYON, Switzerland (AP): Cristiano Ronaldo has been fined 20,000 euros (US$22,750) by UEFA for making a provocative gesture after Juventus beat Atletico Madrid in the Champions League.

Ronaldo was fined the same sum imposed on Atletico coach Diego Simeone for the same gesture during the round of 16 first-leg game in Spain.

Ronaldo scored a hat-trick in a 3-0 win in the return leg in Turin to send Juventus to the quarterfinals.

He celebrated at the final whistle by mimicking Simeone’s gesture.

ASTANA, Kazakhstan (AP): Scotland’s hopes of returning to major-tournament football after a 22-year absence suffered a heavy blow Thursday with a 3-0 loss to Kazakhstan in the first qualifier for next year’s European Championship.

The Kazakhs scored twice in the opening 10 minutes and added another goal in the 51st minute.

Scotland – one of the 12 co-hosts for next year’s tournament – had been eyeing further success after earning promotion in the Nations League last year and had lost just one of their last 10 competitive games.

It was only Kazakhstan’s fifth win in 35 European qualifying games since the country joined UEFA in 2002.FIFA gives life ban to Ecuador official for bribery

ZURICH (AP) — The FIFA ethics committee has given a life ban to a South American soccer official who took bribes linked to the Copa America and Copa Libertadores.

FIFA says Luis Chiriboga, a former Ecuador football federation president, has also been fined one million Swiss francs (US$1 million). It is unclear how FIFA can enforce payment.

Though the U.S. Department of Justice indicted Chiriboga in 2015, he was later convicted in his native Ecuador of money laundering. He was sentenced to 10 years of house arrest.