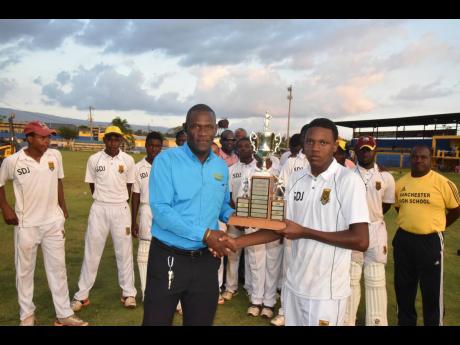 Manchester, who were required to chase 162 for victory, after dismissing STETHS for 196 shortly after lunch, reached the target with about 10 minutes to spare.

Javardi Francis 53 not-out, top-scored for Manchester along with Andre Morgan, who provided an anchor role with 45 runs. Roberto Simpson (3-19) and Andre McCarthy (2-25) picked up most wickets for STETHS.

Earlier in STETHS’ second innings, captain Zavier Burton only added one run to his overnight score, to top score with 36. Wavel Anniford (4-79) and Jaheem Bartley (3-49) were the pick of the Manchester bowlers.

In the first innings, STETHS were dismissed for 187 after winning the toss and elected to bat. Lennox Simpson top-scored with 55. Andre Morgan (4-29) and Jaheen Bartley (4-62) were the main destroyers for Manchester.

In reply, Manchester were all out for 214 runs, getting a lead of 28 runs. A 133-run, seventh wicket partnership between batsmen Morgan (85) and Wavel Anniford (56) rescued Manchester, who were once at 45 - 6. Andre McCarthy was the pick of the STETHS bowlers ­grabbing five for 29.

Coach of Manchester, Barry Barnes, was thrilled to break his alma mater’s winning spell, as he did in 2013, and credited the win to a brilliant first innings performance.

“I think we won it from we were 40-odd for six and the captain (Morgan) and young Anniford batted almost the entire day yesterday to bring us across the line, getting first innings,” Barnes said.

“Today we were under tremendous pressure. I think today was the hardest day of cricket because when you’re in the backyard of STETHS where we call the ‘Lion’s Den’, to beat them chasing 163, I think the youngsters have done well and I must say hats off to them, as well as the entire Manchester fraternity including the principal and chairman, who give us all the support that we needed. I just hope they will continue with this programme,” he added.