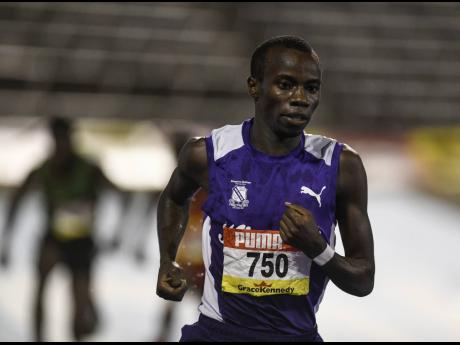 The Uganda-born Rodgers, who has been nursing an ankle injury this season, competed for the first time this season at last week’s Digicel Grand Prix final at GC Foster College, where he finished fourth in the 2000m steeplechase.

However, despite this, Myrie told The Gleaner that he is still uncertain Rodgers will take part in next week’s event.

“I don’t know if Ari is going to be at Champs or anything like that, everybody just have to wait and see,” said Myrie.

“Champs is next week and so if he is going to be there everybody will see,” he said.

“You all know that he ran at the Digicel (Grand Prix) on Saturday and he came fourth and that was his first run out and so at the end of the day, the coaches will determine what they will do,” Myrie said.

Rodgers, who won the steeplechase at last year’s ­championships, suffered the injury in the Manning Cup final against St George’s College last December. KC won the game 3-2 to end a three-decade wait for the coveted Manning Cup title.

Myrie added that KC’s coaching staff is not overly dependent on Rodgers this season because they had already put other plans in place if he is unable to ­compete at the five-day championships, which beings on Tuesday.

“Ari has been injury for the whole year and so every plan is being made without him,” said Myrie, “If Ari is going to perform then everybody is going to see him at Champs and if not, then he will be watching from the stands.”