Cameron: I am not a power-hungry despot 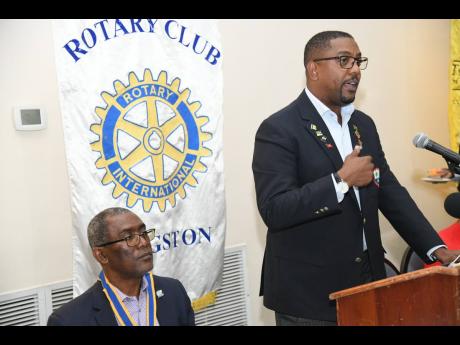 Today Dave Cameron will learn if he will continue as president of Cricket West Indies (CWI) for a fourth term at the CWI board’s annual general meeting taking place at The Jamaica Pegasus hotel in St Andrew at 9 a.m.

And although he is confident of victory, Cameron has sought to dispel the notion that he is an arrogant leader.

The Jamaican has faced mounting criticism in recent years from former players, former captains, and heads of territories across the region about his leadership style. But the 47-year-old believes his age might have contributed to people believing that he is arrogant.

NOT AN EVIL GENIUS

“I am not an arrogant, evil genius, or twit,” said Cameron while addressing members of the Rotary Club of Kingston last Thursday at The Jamaica Pegasus. “I am not a power-hungry despot seeking to hold on to the reins of power indefinitely.

“I prefer to be remembered as the humble servant who has served West Indies cricket in its best interest,” he said.

He continued: “One of the things is that I am young, so there is a perception that, because I am young, I should take instructions, but I would like to think that I am experienced even though I am young. I have actually been a manager for half of my life. I have been managing people who are older than me from I was 22 years of age. Oftentimes, you would hear people say that Dave doesn’t listen. What does that mean? I like to tell you exactly how it is rather than give you the indication that we are going to do something while we don’t have the power to do it.”

Over the last week, the likes of legends Sir Vivian Richards, Sir Andy Roberts, and Clive Lloyd, along with Darren Sammy, have all come out in support of challengers Ricky Skerritt and his running mate, Dr Kishore Shallow.

“West Indies cricket has always been about individuals at some point in time. The culture of the organisation has always been who is the captain of the team and maybe my persona has overshadowed the current captains of the teams, but all I am trying to do is to set West Indies cricket on a path. It appears to be Dave Cameron’s path at this time, but the directors agree and the path is one where we believe in standards,” Cameron explained.

Cameron, who, along with Skerritt, made a presentation to the Jamaica Cricket Association last week, says the meeting was productive and is expecting the local association’s support today.