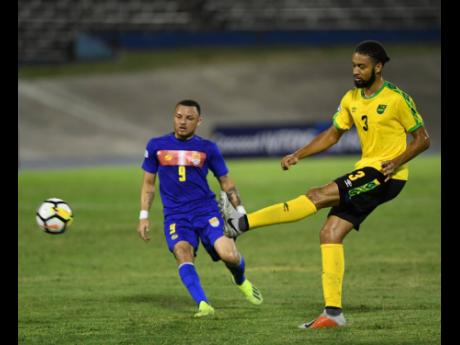 Jamaica's Reggae Boyz will take on hosts Costa Rica in a friendly international match at the National Stadium in San Jose tonight at 7, Jamaica time.

The Reggae Boyz, who ranked 54th in the world, are coming off 2-0 defeat to El Salvador in their CONCACAF Nations League game at Estadio Cuscatlan in San Salvador on Saturday. Theodore Whitmore's team produced a craven display, consisting of only two shots, with none on target. Their goals conceded on the night were a result of poor goalkeeping and defending as Andre Blake fumbled a catch from a free kick, leading to the first goal, then defender Damion Lowe headed into his own net late on.

Whitmore is expected to make several changes to his starting line-up as the Costa Ricans, ranked 37th in the world, are expected to be a tougher challenge today. One definite change will be in attack as Darren Mattocks will be missing after his red card on Saturday. Dever Orgill, Junior Flemmings and Maalique Foster, who spent time at Costa Rican side Alajuelense earlier this season, are all in line to replace him up front.

Like the Jamaicans, Costa Rica are looking to bounce back from defeat. They lost 1-0 to Guatemala on Friday and head coach Gustavo Matosas is expected to field a strong squad to appease the critical home fans. Keylor Navas of Real Madrid is expected in goal while Celso Borges is expected to go up against Jamaica's JeVaughn Watson in midfield. Joel Campbell, now at Mexican side Leon and formerly of Arsenal in England, is expected to start in attack for Los Ticos.