JC turn to God for Champs 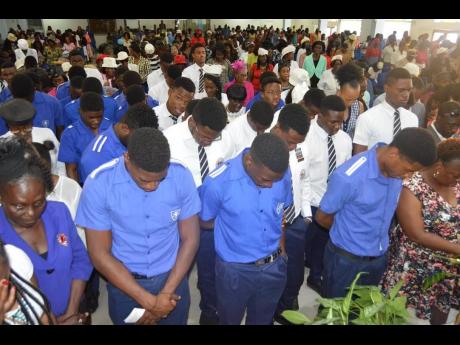 Contributed
Members of the Jamaica College track and field team attend a church service at the Faith Cathedral Deliverance Centre in St Andrew yesterday. The team was seeking blessing from God in attempt to win their first ISSA/GraceKennedy Boys’ Athletics Championships trophy since 2011.

Members of the Jamaica College (JC) track and field team and their coaches have sought prayer to boost their chances of taking home the ISSA/GraceKennedy Boys’ Athletics Championships (Champs) title, after failing in their bid to do so since 2011.

Several of the school’s star athletes and their coaches were given bibles and a cross during the worship service at the Faith Cathedral Deliverance Centre off Waltham Park Road in Kingston yesterday as they sought to break their losing spell.

Senior pastor at the church, Bishop Herro Blair, assured them that prayer would help them to beat their rivals.

“With all the spotlight on JC at this time, we pray that in another week’s time, oh God, the spotlight will be for a different thing, it will be because they are champions,” Blair prayed.

Education Minister Ruel Reid, who has been on secondment from the principalship of JC, was sacked last week and is currently under investigation surrounding allegations of corruption and misuse of public funds at the ministry. The JC board is now awaiting a meeting with Prime Minister Andrew Holness to discuss his fate as he is eligible to return as principal since his contract ends in 2021.

But despite the controversy surrounding the school’s leadership, the athletes are more focused on taking the Mortimer Geddes trophy this weekend from their rivals, Calabar High School. That institution has also come under public scrutiny after physics teacher Sanjaye Shaw accused the leadership of the school of failing to properly discipline star athletes DeJour Russell and Christopher Taylor, whom he alleged assaulted him last December.

Member of the ‘True Blue’ team Ryiem Robertson is confident that they will lift the trophy this year.

“With Christ, everything is possible,” he told The Gleaner yesterday.

Former Permanent Secretary in the Ministry of Education Dr Maurice Smith was also present during yesterday’s sermon and sought to encourage the team in its quest for victory.

“Don’t listen to what people are saying; keep your eyes focused,” he urged.

Head coach for the JC team, Neil Harrison, said the team generally kick-starts the week before Champs with prayer. Harrison was the head coach of Kingston College last year and came under pressure to leave from sections of the North Street fraternity after that school finished second to rivals Calabar.

“I feel in my spirit that something good is about to happen,” said the coach, who was singled out for special prayer during yesterday’s service.